IT and Overtone Singing

There is one major hurdle for most singers who set out to learn to sing overtones:

It may be difficult to hear one's own accentuated harmonics

On the other hand the majority of participants in a beginners workshop, fortunately will be able to hear the harmonics of the others, so we are reassured that it is something that most singers can crack in a relatively short time.

If you have the noble ambition to reach a sense of what is actually taking place, noone gets away without practice in private, and then it may be useful to have access to various aids. Here, the development of IT came in handy, and below I shall present a few programs which manage the task of showing our voice content spectrographically. Thereby it becomes clear that what we normally understand as a tone is in fact a composite sound (what the Germans and Scandinavians call 'klang'): It consists of a series of harmonic overtones that are more or less clearly accentuated in the overall sound.

The Germans Wolfgang Saus and Bodo Maass have developed the program Overtone Analyzer specially for overtone singers. It is so far only available for PC, but not as a smartphone app or for Mac and i-products. It is almost inevitable for harmonic aspirants, and it is fortunate that the developers generously have made it available for free download for three months of testing at this link. At this link is an example of how I have used the program to illustrate some basic situations in overtone singing based on a widely circulated video where Anna-Maria Hefele demonstrates her skills.

I have not had the opportunity to test the options for Mac, iPad and iPhone users, but I found a few apps in iTunes, which may do the job: App1; App2; App3

In the following I shall refer to available apps for users of Android based smartphones, and here I had the opportunity to test two free programs, both absolutely functioning: Sound Analyser PRO and Spectral Audio Analyzer. The easiest way to communicate how they work, will be by screen shots of the user interface. The first example shows differences in the sound structure of cardinal vowels: On a steady tone I have sung [α], [o] and [i] respectively and it is immediately apparent that they are composed of different overtones. The first partial, about 150 Hz is accompanied by harmonic overtones at about 2x150 Hz, 3x150 Hz, 4x150 Hz etc. respectively.

Below spectrographies are shown from Sound Analyser PRO, which displays both landscape and portrait view and further down from Spectral Audio Analyzer, which has only landscape mode. Lettering in white at the actual time-frequency field has been added by me subsequently. Note the different colour codes! For the sake of precision I have used symbols from the International Phonetic Alphabet (IPA), which I recommend every harmonic aspirant to learn for an understanding of the organic relations between roundedness, primary resonance, opennness etc. There is a fine interactive chart, where you may hear the pronunciation of each sound (click the relevant symbol) at this link:

- [α] (open rounded back vowel, like in arm) presents a broad spectrum. The first seven partials (displayed as horizontal strips) are relatively strong and there is a steadily decreasing response for partials well into their twenties.

- [o] (rounded back vowel) is especially characterized by the first four partials, after which impact weakens markedly, although the sound is also influenced by partials #15 and #16 and around the #21-22. 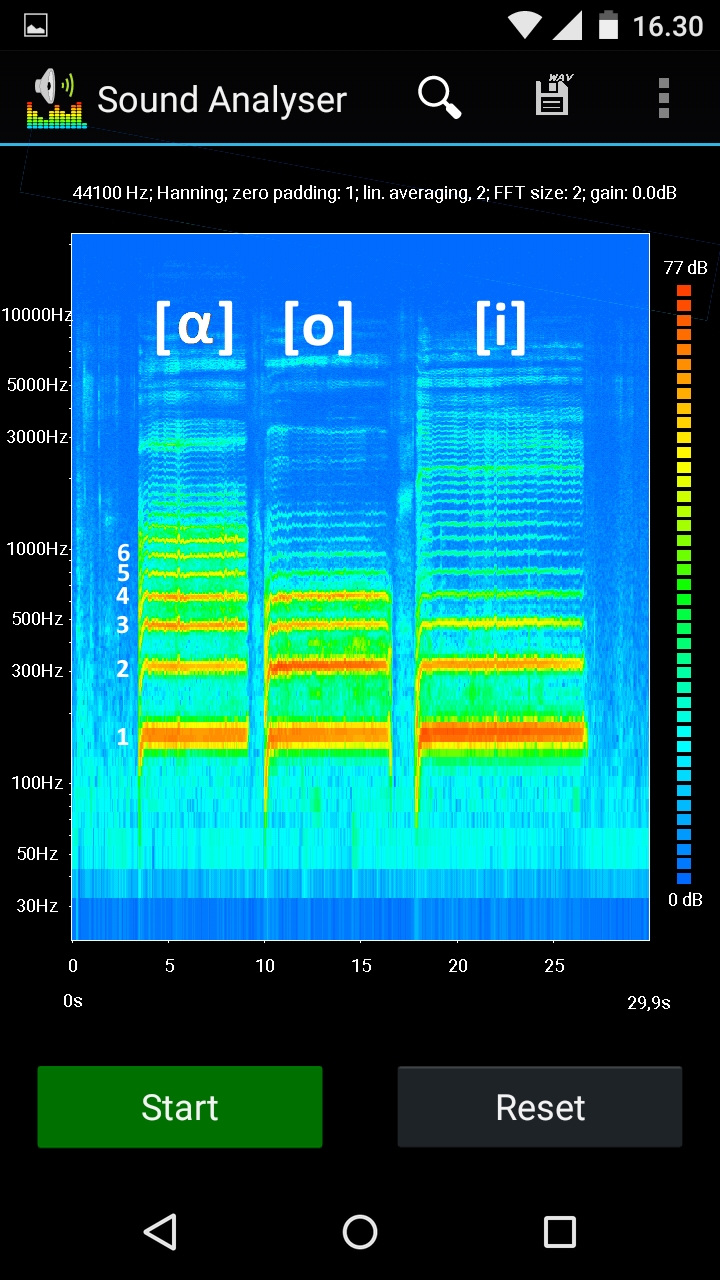 The following screen shot shows the first real steps to deliberately accentuating each of the overtones by choice. Here we have our basis in the rounded back vowels and their organic development from narrow to open: [u]-[o]-[ɔ]-[α]. The lower elements of the harmonic series, 2-3-4-5-6 can be heard unfolding along this line, but there is not a 1:1 relationship, particularly as it also depends on the pitch. It should also be noted that the way we shape the vowels in overtone singing is somewhat different from speech and other ways of singing.
In the exercise here I have accentuated the harmonics # 2-3-4-5-6-5-4-3-2 so that the spectrography takes shape of a 'pyramid'. Twice in the Sound Analyser PRO, three times in Spectral Audio Analyser. 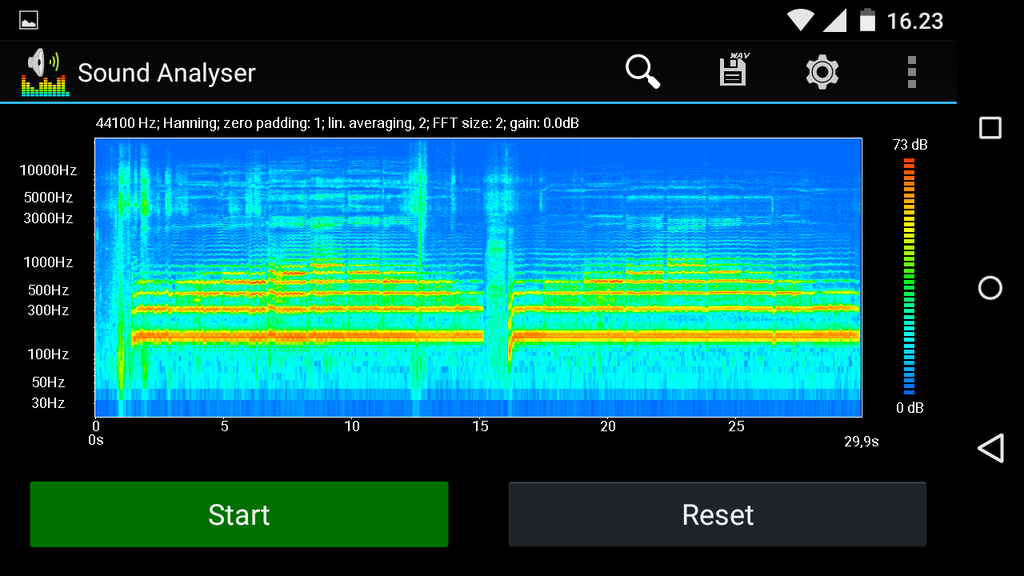 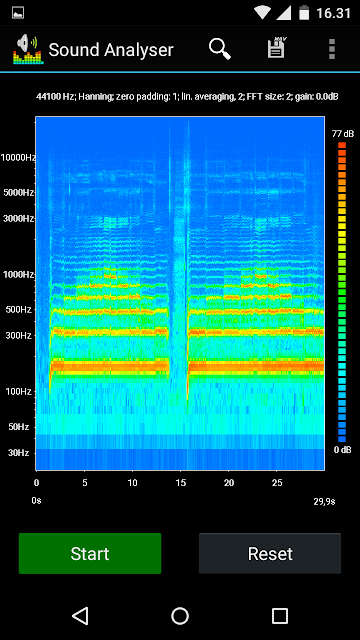 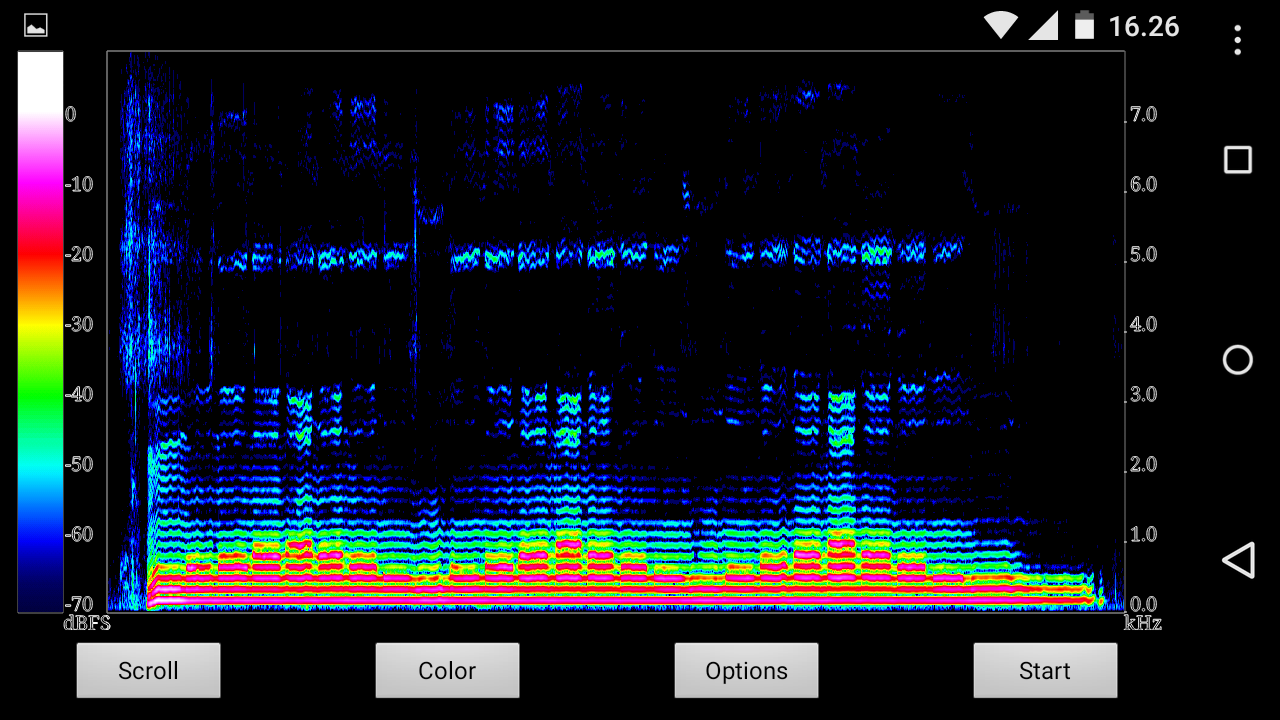 About the programs should also be mentioned that the Sound Analyser PRO, which I prefer, has far more configuration options, including the logarithmic display of frequencies, which I have chosen. Below are screen shots of the settings that I have used. The program's only real drawback - besides that you need time to familiarize yourself with its possibilities - is that the screen size is not optimal.
Spectral Audio Analyser is more stripped down, but also easier to go to. It has one function that is not available on the Sound Analyser PRO, that you can turn off the colors so that the relative strength of the partials is only displayed by degrees of light. 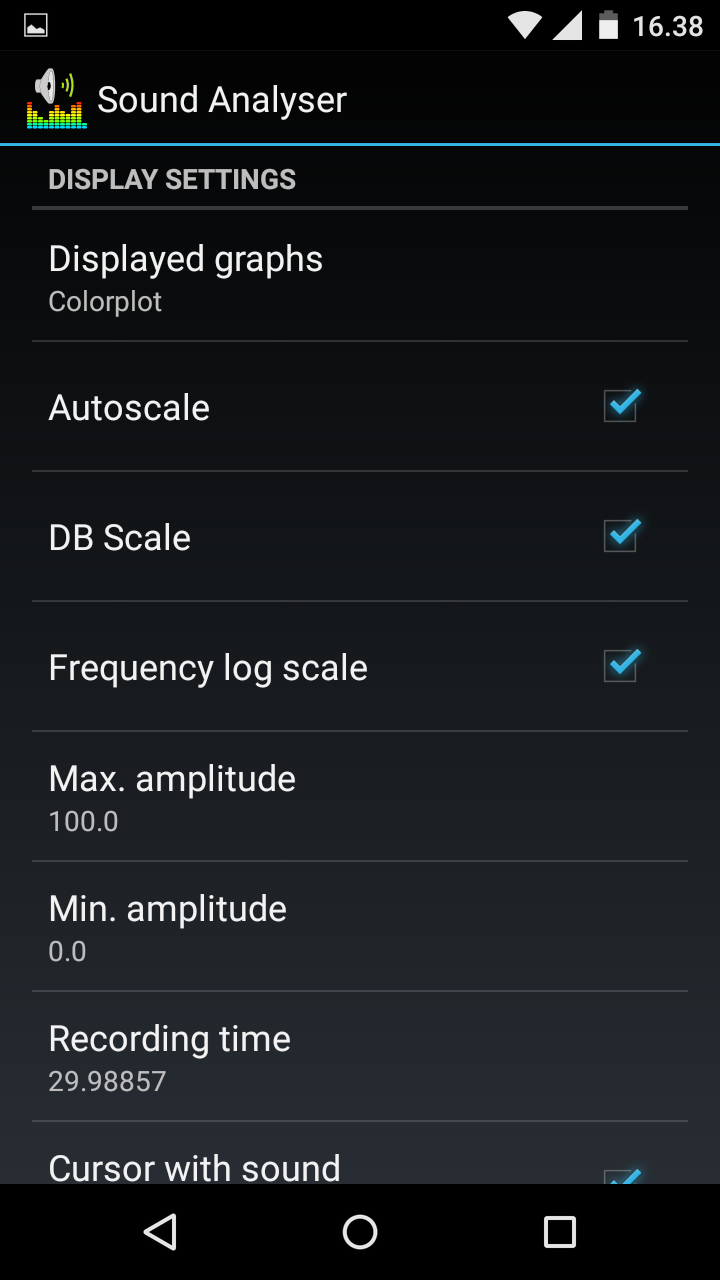 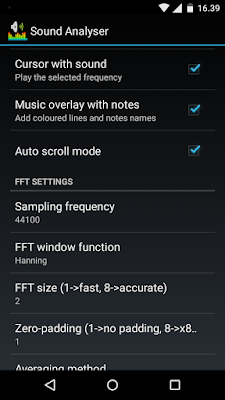