"How do the bowls (acetabula) sound? - What a sweet tone they produce when they are struck in different ways. Man accepts their sound with such great gladness that he believes hearing to be the best sense."
Cassiodorus (approx. 485 in southern Italy-c. 585)

Tibetan singing bowls have a wonderful, pure sound, but they are hardly Tibetan, in fact it was probably only in 1972, with Henry Wolff and Nancy Henning's album Tibetan Bells, that the idea of where they came from was launched:

As with many concepts with origin in new age many misleading notions about singing bowls have arised, first to mention may be what they are made of. The Wikipedia lookup give us a much needed dismantling of some of the worst misconceptions, but ironically, it then repeats a myth that no one should take too seriously, but which is seen over and over again, namely that the so-called crystal singing bowls ”are made of re-formed crushed synthetic crystal.” As I have explained elsewhere, this type of bowl, like any other glass, is made of quartz sand, albeit of a type having a high purity percentage, with respect to the content of silicon dioxide, SiO2, the most common mineral of the Earth's crust, which for instance is found in common Danish beach sand.

The singing bowls are already expensive, but if they were made according to the recipes that are typically presented in the new age environments, they would not have been payable at all, and the seven metals (gold, silver, copper, iron, tin, lead, mercury), which is so much talked and written about, is thus from an old European, not a Tibetan, tradition where they are believed to correlate with seven celestial bodies (In order: the Sun, the Moon, Venus, Mars, Jupiter, Saturn and Mercury). 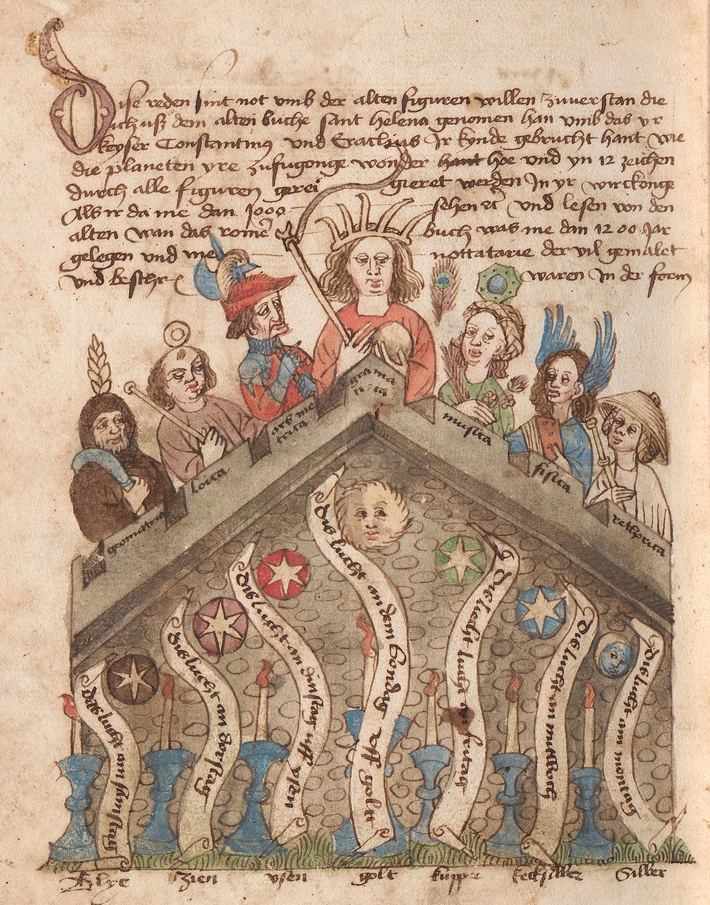 So singing bowls are made of bell bronze, which is an alloy of copper and tin. And talking about materials I can't help pointing out that you can find very beautiful sound in brass, glass, hammered steel, porcelain, aluminium et cetera of salad and fruit bowls. Listen to a song where I accompany myself by a hammered stainless steel bowl from IKEA which cost about five pounds. Unfortunately, the recording is not in the highest technical quality: Here is a sound spectrogram of the above-mentioned bowl and my voice, respectively, while trying to intonate to its sound. The red and white writing within the frame have been added by me subsequently. There are two things that are worth noting besides the fact that the sound spectrum of the bowl is somewhat more complex than most bowls sold as singing bowls:

* The bowl's tone (left) does not reveal a harmonic structure (having dissimilar frequency distance between its partials), while my voice (right) does have a harmonic structure (partials being multiples of about 140 Hz). In other words and in technical terms the bowl displays some degree of inharmonicity.
* I do not intonate according to neither partial #1 or #2 of the bowl, but the interval between partial #3 and #4 which I adapt as a fundamental tone (~ 140 Hz, about C♯)

As stated in the Wikipedia lookup, one must seek the roots of the singing bowls in China, and there is no evidence of singing bowls in use in Tibet before modern times. The following reminds me of other myths that have been dealt with here on the blog, namely the notion that taijitu (the ying-yang symbol) has a history of thousands of years when in fact it is limited to about 500 years and there is evidence for significantly older finds of it in Europe. Likewise the notion about the rainbow spectrum colours assigned to the chakras which also is actually not much more than 50 years old.

Sound bowls were used musically in the Byzantine Empire at least 1,500 years ago! A new age girl band is turning it up to eleven... or maybe it is rather an old age band. The image is a mosaic from a Byzantine villa in the village of Maryamin near Hama in the present Syria. It is believed to originate between late in the 4th and 6th centuries.

It is doubtful if the two erotes are treading the organ bellows, as the organ pumps of that time were water driven. Aulos is often called a double flute, but it is a double reed instrument, so 'double-oboe' would be more accurate. Then there is a sizeable cithara ... and my word if they haven't run a whole arsenal of singing bowls in position too!!? 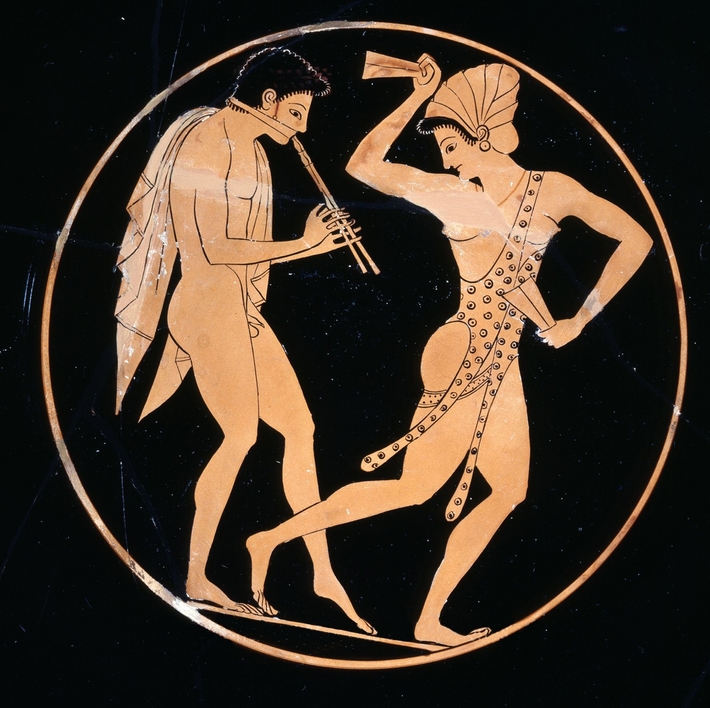 Epiktetos: Aulos player and dancer with crotala. Red figure vessel from Attica, about 520 BC.

The music is probably less relaxing and spherical than what we would associate with singing bowl music. The two flank figures both use instruments known as crotala, that have sounded like castanets.

As can also be seen from the introductory quotation, the notion has merit: Both in the Eastern and in the Western Roman Empire, they were devoted to the sound of the sounding bowls. Their name was oxyvaphi, and the culture of their music is dealt with in this dissertation from page 59 onwards. The text also contains a number of quotes on the supposed Greek origin of these sound bowls and their materials. Look here as well! Again in the center of the motive: More Byzantine singing bowls (although one could suspect that Chagall has lent his hand to the image): 6th Century, Vienna Genesis. The picture refers to a Bible text, Genesis, 40, 20, Joseph as a dream reader at Pharaoh, and reproduces a banquet with lying courtiers besides the stage, and, at the top, right, the scene with the baker being hanged from a tree.

Finally to be mentioned is a different precursor to the modern singing bowl culture, namely the glass harmonica, which Benjamin Franklin optimized in 1761, allowing more complex music to be played on it. There is such an instrument at the Music Museum in Copenhagen. Thus we can finish delving into music: