Magic Sounds is about ancient therapeutic sounds of vocal harmonics; sounds of the environment which are in effect mesmerizing, soothing and can assist the letting go of tension. It has been used for millennia to calm herding animals in Mongolia, Tuva and Sardinia Musically it traverses across many music genres - meditation, ambient, chill-out, fine world, soundtrack, spiritual (non-religious) and contemporary choral music. It is a music journey of sacred sounds, uplifting soundscapes and original composition. It features vocal instrumentation, an approach to singing which far pre-dates songs. The concept for this unique album began ten years ago when Dean and Linda found ways of using voice to calm their young baby.

Though initially intended as a baby-calming album, it evolved into a people-calming album which also calms babies. Aware that music for babies can be be unsettling for everyone else, Magic Sounds is both gentle and powerful, and musically interesting. In Mongolia, Tuva and other traditional herding cultures harmonic throat singing has been used for thousands of years to settle animals after being disturbed by predators - much like modern day horse whisperers. Given that many animals have short term memories, much like babies, harmonics can help them forget about what disturbed them in the first place.

This surprising album addresses the following questions: Can sound actually be therapeutic? Can a therapeutic cd contain enough musical edge to be musically interesting? Can it feel spiritual without being religious? Can an ambient cd also be organic and based around voice without the singing of one word?

Dean Frenkel broke the Guinness world record for the longest continuous vocal note (57secs) on Enough Rope with Andrew Denton. Linda Laasi won an ARIA award for her vocal contribution to Paul Kelly's soundtrack to feature film 'Jindabyne'. Together they have created music for many spheres, inner and outer. They have also created a mini children's meditation storybook called 'The Magic Sounds of KahMing' which is an added extra with Magic Sounds. 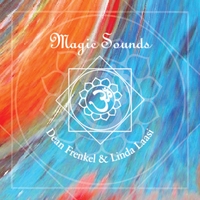 Comment by Jens Mügge on June 9, 2009 at 10:41am
Your fantastic CD is also available via amazon.com MP3 downloads - or in CD Format ... I can't conceal that I like this recording so much. Stay tuned, Dean!

Thanks for the live performance. More impressive than you realise.