Just Intonation in Notes and Numbers 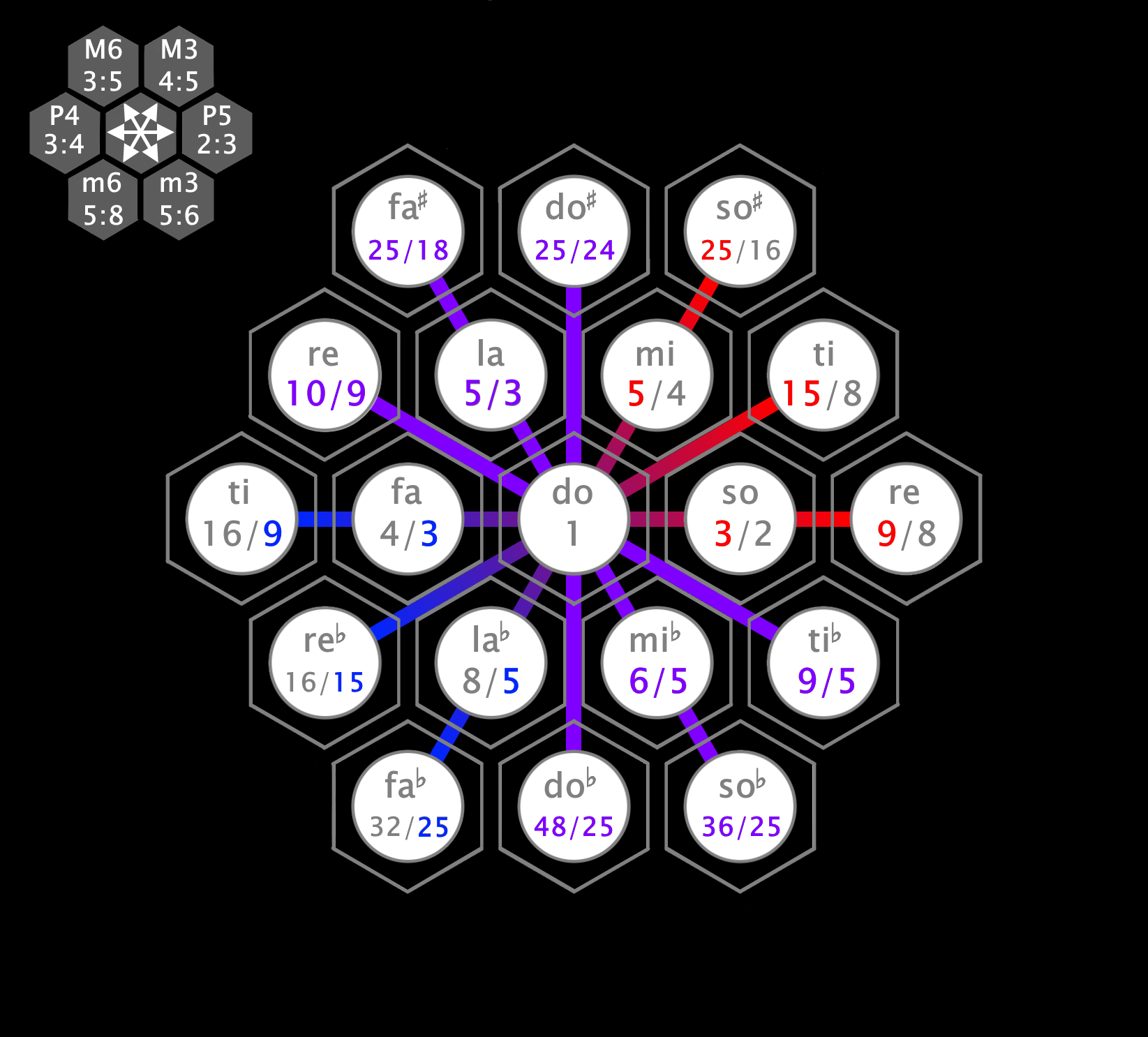 The above was a response I received from the music director of the Copenhagen Round Tower, who himself was a high-level musician, when I told him that the theme for one of the concert evenings at the week-long program in connection with the exhibition Spiral Tonality, 2008, should be Just intonation. His facial expressions and tone of voice certainly did not indicate immediate enthusiasm.

Although the equal temperament is practical and has evened out almost all the many facets of tuning theory, so that only a few, even among music experts, are really aware of the countless other ways of tuning, Just intonation in certain contexts certainly has its justification, not least because said equal temperament, culturally has given us a conditioned habituation to consider significantly false tones – 4 of the 12 intervals in the series – acceptable. The intervals in question are minor and major thirds as well as minor and major sixths, all of which deviate about one-seventh of a semitone from the acoustically pure intervals. 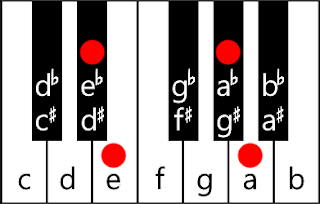 In a scale based on C, played on most modern pianos, keyboards, guitars and more, the tones indicated by red dot will be considerably false.

When said musician reacted as he did, I would argue that it may not only, but also, be because the pure intervals may sound peculiar when throughout one's life you have become accustomed to playing and listening to false versions. However, the the music director's tone of voice did change when it became clear that the program would feature Per Nørgaard (leading Danish composer), and that he himself would show up for the concert, where he played excerpts from his works Turn and Spell.

Just intonation is based on the tones from the harmonic series, which – given by nature as it is – is our ultimate reference for the purity of intervals. You can get an impression of these intervals in the interactive rendering of the octave spiral programmed by my friend Marco Gianotta. The red spiral represents the first four octaves of the harmonic series, 1-2-4-8-16. When you start in the center and follow the red spiral arm clockwise, each revolution will represent one octave. More and more tone functions (integers) are added with each turn, and thus the neighboring intervals become ever smaller:

The partials of the harmonic series are thus mirrored about the vertical axis in the inverse, blue spiral, but also the intervals in the outer, gray circle have a mirror character. The fractions are inverse of each other, as the inverted fractions are in all cases by 'octavation' (multiplication or division by 2-4-8 ...), are brought into the 'mother interval' 1: 2 (one to two).

The self-chosen limitation in historical Just intonation is that it only operates with the first three primary functions in the harmonic series, corresponding to the first three prime numbers, 2, 3 and 5, which translated into music have to do with the intervals octave, fifth and major third. NB! In that particular order: prime number 3 creates the perfect fifths of music (contrary to fifth step in the constructed scales of music), prime number 5 creates large thirds (constrary to the third step in the constructed scales of music).

The numbers should be understood in the light of length divisions of a string:

I am passionate about drawing diagrams to illustrate the patterns of the music. This post was born out of conversations with a good friend who inspired me to illustrate how intervals in a set of notes are complementary within the octave, and just as all musical intervals can be said to have their actual origins in the harmonic series, so an inversion of this series with the somewhat compromised term "subharmonic series" may be considered the origin of half of these intervals: 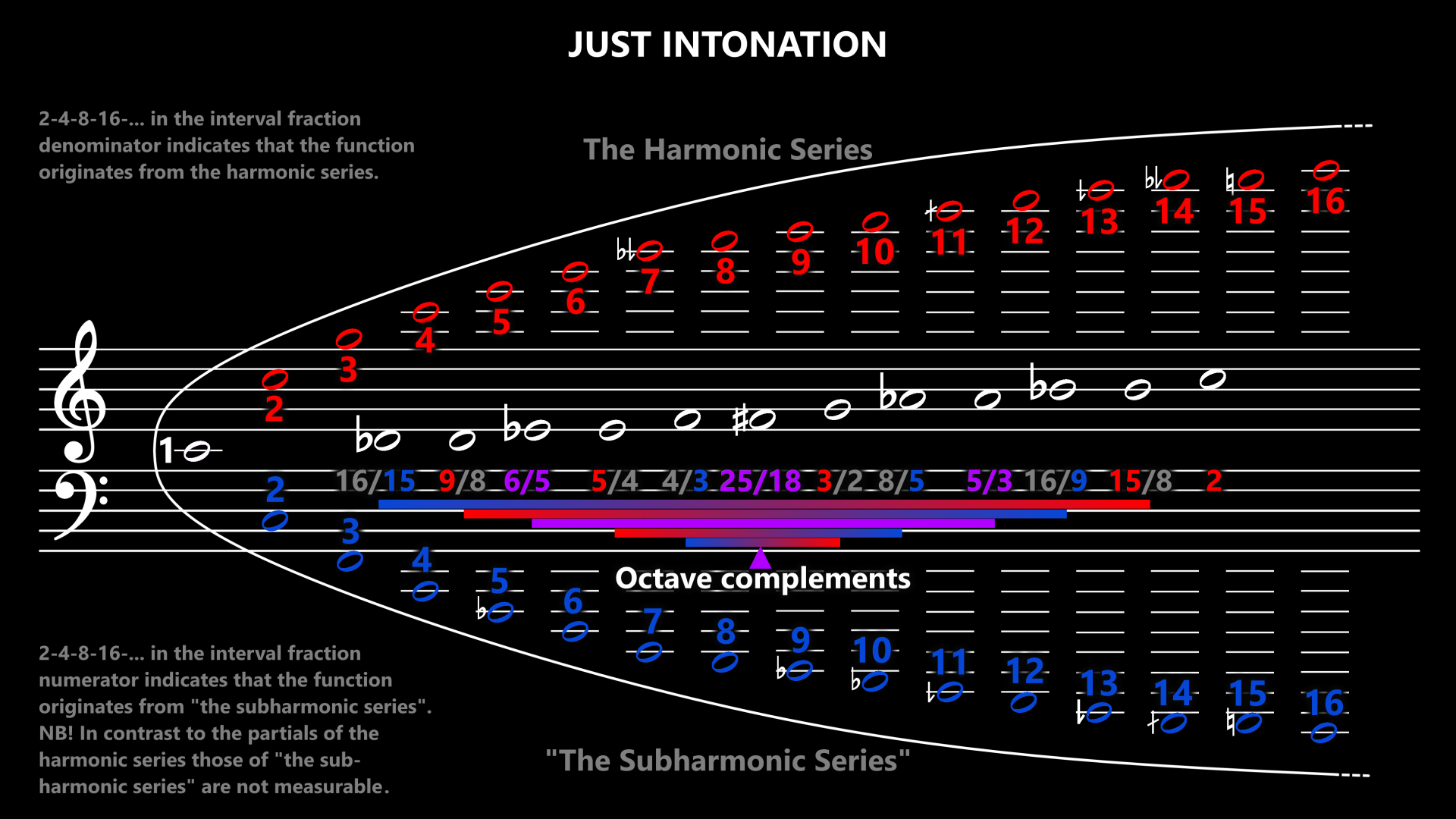 Tones originating from the harmonic series.
Major and augmented intervals generally behave as 'expanding', feeling 'major-like', and tend to outward resolution.
In the harmonic series, 2-4-8-16 -... are different octaves of the fundamental. When these factors are in the denominator of a (relative frequency) interval fraction, the interval has its direct origin in the harmonic series (the opposite is true for relative length fractions):

When 2-4-8-16 -... is in the counter of an interval fraction, the interval may be considered having its origin in the "subharmonic series":

Some just intervals are not directly related to a preceding prime (red) or a subsequent octave (blue), but occur between other partials of the harmonic series. These intervals may be either contracting (not least 6/5, the minor just third) or expanding (not least 5/3, the just major sixth): 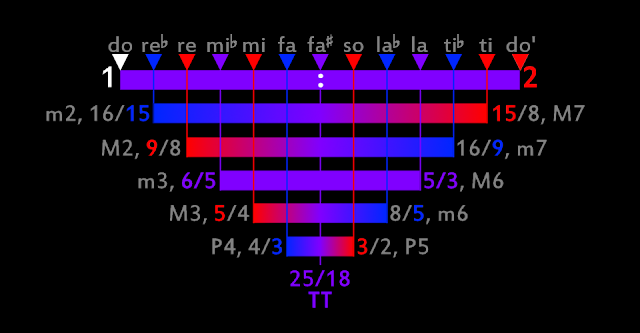 A more detailed look at the complementary intervals shown below the white notes in the diagram above. Here, the same intervals as above are also described on an axis. During the tone selection on the top row, the intervals are arranged in pairs, complementary within the octave: 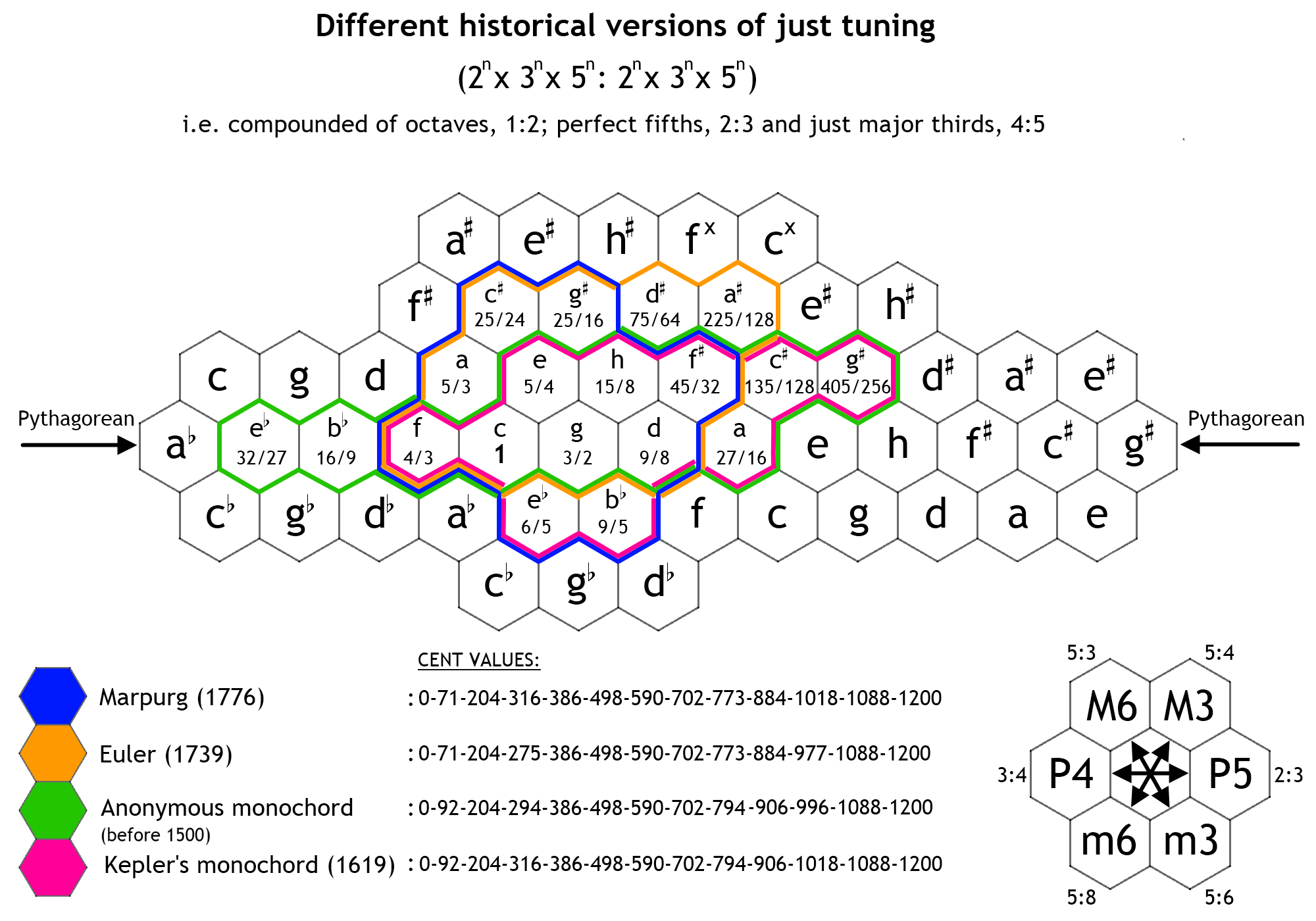 The Just intonation played a special role in the early Renaissance, but one of its disadvantages was that disonnant triads occur if one moves far away from the original tonal centre. However, the important role of the just thirds was cemented, which had been a problem in the preceding Pythagorean tuning, where these were not pure at all. A compromise between the two disadvantages was sought to be made in the subsequent meantone temperament, where in the most widespread version the major thirds are just and the fifths a little too small.

Then followed the diversity of well temperament during the baroque, where the music would more factually enter the era of modulation between different keys. This should not be confused with equal temperament which took hold later, generally well into the 19th century.

In the context of Just intonation, mirrorong and complementary intervals, it would be appropriate to mention the American Harry Partch (1901-74) from modern times. In his most famous version of Just intonation, the boundaries were expanded, so that he not only included the first three prime numbers and their music, but also the following two, ie 7 and 11. Thus he got a microtonal tone system, where the octave is not like habitual division into 12, but into 43 steps. In other words, Partch's extended mood is a [2; 3; 5; 7; 11] system.

Here the steps are depicted clockwise, from small to large. They all have a complementary partner on the opposite side of the vertical mirror axis: 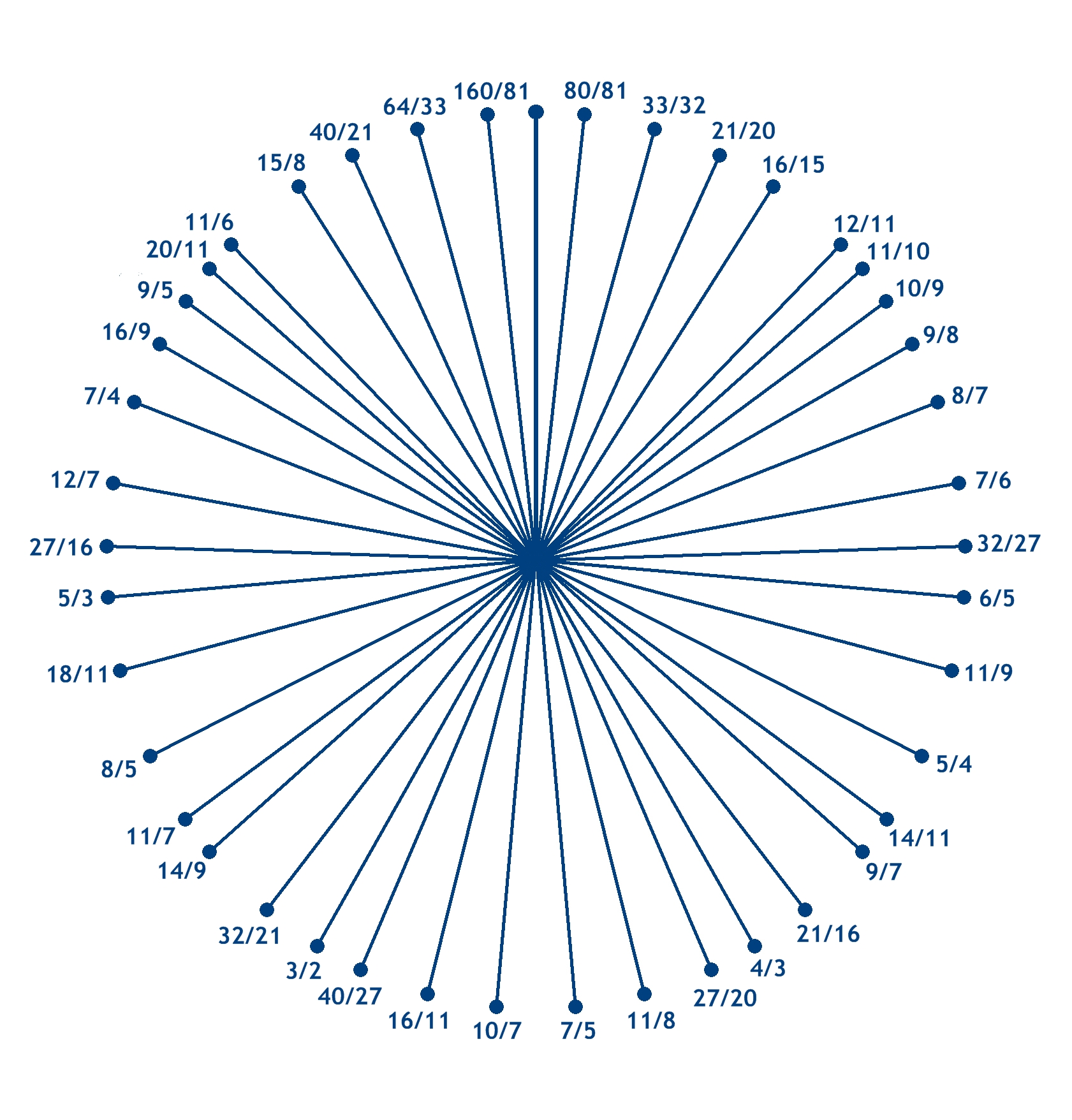 And here is a similarly complementary Partch tone system consisting of 31 tones per octave: 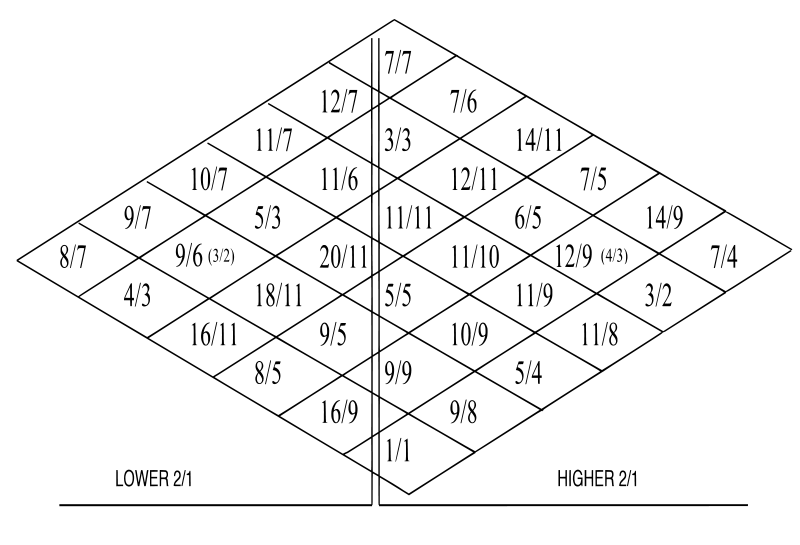