In Mallick's heart, a Musical Experience

I woke up in Allahabad the 18th of January, early morning, in the famous
train Prayagraj Express, wich let me sleep, almost better than those
few days staying in New Delhi. After 2h rickshaw turning around and
around for a place to just let my things and discober this non turistic
city called Allahabad. 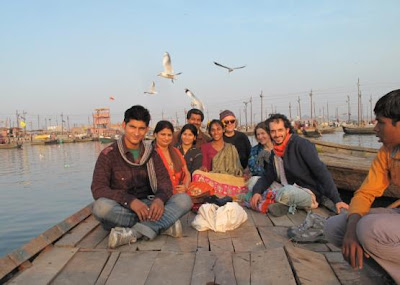 Just let my things in this room and asked
to hostel manager what things would be interesting for me to see here.
I was having 1 day or more by my own before meeting Prem Kumar Mallick,
so I let my own on adventure to Sangam, and the Ford. Sangam is where a
Mag Mela is taking place during one month every year: So a huge
splanade of more than 20.000 people camping there (being the bigest
camping in the world) next to the meeting point of the Yamuna and Ganga
rivers. This holy place goes on with pooja (praings to god), all day;
is a completly devotional place, full of swamis, an spiritual hinduist
seekers. There I got blessed by a Baba for a turist price, and got my
first lesson on repeating this holy words he was saying. I also got a
more extended meaning of the word Nadi (Naadi) that is a channel, but
also can be a riber, as well as the meridians (in acupunture).So
after a couple of calls Prem Kumar arrived to Allahabad, coming from a
program from Calcutta। Those days were so foggi, as usual in this
period of the year, that trains were taking big delays; so the 19th in
late afternoon. After meeting Pryanka (Prem's daughter), and Guruma
(Guruji's -Prem- wife), and Rani (studient), I let my few things in a
nice room, in Mallick's house, and took the first vocal class in
Dhrupad singing, straight away.

SA RE GA MA PA DA NI, would be
my main words in the next three week's, that I already knew. So I was
begining with this old and beautiful (and not easy) raag (indian
composition), where all the notes are sudha (natural) but MA (the
fouth) is tivra (FA#): this is an evening raag, called Yaman (belonging
to the group of Kalian thaat). In one hour I got the Alaap (that is the
part that introduces all the pitches that will appear, very slowly -it
can take 30 minutes or more). And then the composition (in Chautaal, 12
beats rithm) where, in some phrases, the devotional song is sung. Just
poetry to the ears and spirit, in a close relation of the roots of our
culture. So the learning must go, as far as I realized, in 3 diferent
directions: the music (melody and rithm), lenguage (understanding, and
pronounciating), and culture.Life became easy in this house,
very fast. Mallick's family come from a very old garana tradition (13
generation) and they love teching, and they know how to do it. Apart
from their musical knowlege from Dharganga Garana (their own family
tradition), they give us this great traditional indian food, wich
guruma is all they preparing with the help of Pryanka and some students
in the kitchen, also (like Lisa, the wife of Peter Phannke). Like in an
ashram, we share house, food, cultures and art, that is going on all
time. Just some days in the house, and I went to a recording session to
play tampura (drone string instrument for acompaniament indian
classical music) in the local radio of Allahabad, with both Mallick's
sons Nishant and Prashant.This house is more like an ashram than a
common house. Seven days a week, students of all ages are coming to
recive their lessons, from morning to late afternoon. As Guruji is
teaching in the University of Allahabad he needs to take care of the
well musical developement of them all. And also we (the students living
with them), and some family visitors, and friends that may stay for
some days. Is a 3 bed room house, one living room, one kitchen, and one
room for the music, and I might have seen 100 diferent persons here in
10 days, couning students, family, long distance visitors from all over
the world, some old students from Guruji's Father, and press.

Dayly life in Allahabad
30 Jan. 7:15, AM, Purnima (full moon).The soud of the train reaching the city does not disturb the singing birds surrounding the house...Again with the rising sun the electronic tampura wake's up the house, with Guruji's voice, and every one in the house hears the calling to get together downstairs, in the smallest room of the house to wake up the
voice, while the txai (tea) is geting ready: This is in both ways to
get worm and to get together (wich indians just love -that's why this
country is so crowded). Here the strechings are for the voice, and some
morning raag, like Gurkuly orBhairav, will be played.After
breakfast, some exercices in the rooftop, cleaning the house, or
whatever is needed, while the students begin to come for their practice.So
Music keep's on, as well as preparing the food, the morning pooja, and
all daily ritual, but today, with the special energy of the Purnima.In
the end of the day, after some shoping in the comercial area, we reach
Hanuman temple, get some prasats and give more make more pooja.

Text by Joel Olive.
www.nadis.cat
The Mallick Family and the Dharbanga Garana
by Peter PhannkeThe Mallick Family is the leading representative of the court music tradition of Darbhanga, a former state in the north-eastern corner of India, close to the Nepalese border. They trace their line to the
singers Radhakrishna and Kartaram who appeared at the court around 1785
and made a name for themselves by averting a drought by singing of the
magical rain Raga Megh. Maharaja Madhav Singh of Darbhanga granted them
the title Mallik - landowner - and awarded them two villages and the
surrounding landed property, which the family owns up to the present
day. They served at the court until 1947. After the death of Pt. Ram
Chatur Mallik, the last court singer, in 1990, and Pt. Vidur Mallik in
2002, Pt. Premkumar Mallick is the leading musician in the family. The
Malliks are famous all over India for a very rhythmically elaborated
interpretation of Dhrupad. Except for Dhrupad and Dhamar compositions -
of which they possess an unparalleled stock - they are also known for
their exposition of Khyal, Taranas, Ghazals, Bhajans and songs of the
medieval poet Vidyapati in Thumri style. Premkumar and Rashmi Mallik’s
sons Prashant (27) and Nishant (21) have been awarded Gold Medals in
the All India Radio Music Competition in the field of Dhrupad &
Dhamar, whereas daughter Priyanka (23), who gave her first concert at
the age of 7, is excelling in Khyal.In Europe, they appeared first
in 1983 in the European Dhrupad Mela organized by world music
specialist Peter Pannke, who has lived with the Mallik family in India
for many years. In 1992 they took part in the Parampara! Festival in
Berlin. The 1993 European tour climaxed in the opening concert of the
New Jazz Festival Moers, in 1994 they appeared at the legendary BBC
Proms in the Royal Albert Hall in London. Since then they have
performed regularly all over Europe and in America.More info: http://www.premkumarmallick.com/

Comments are closed for this blog news