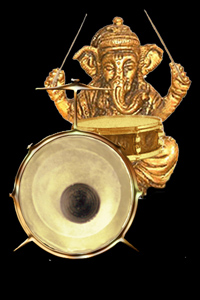 Main aspect of this project is the improvement of intercultural exchange between eastern and western musical approach, with a particular attention to Indian subcontinent area. It’s a long time that Hindustani and Carnatic music play an important role in the fusion process with west: from the first echoes present in some 60’pop music hits (Beatles, Beach Boys, Rolling Stones ecc.) to the deep and more articulated contamination, in a jazz key, realized by pioneer of fusion, John McLaughlin, with his group Shakti and, recently, with the recordings made in Chennai, where we can hear the young lions of Indian music, you can see how stimulating and interesting may be the dialogue between the two cultures. All this innovative ferment you find in the tracks of the new McLaughlin work “Floating Point”, where you can listen to very interesting east-west contaminations.
The very new aspect of the modern musical dialogue between west and India is the great mastering of harmonic structures that some Indian musician are showing, yet keeping live and present their legacy with the classical roots of Raga. We can say that now the dialogue between the two worlds is more equal and complete: if in the past the Indian musician were the teachers, now we can see how they are more interested to western culture and instruments: starting from the typical drum set, going through synth keyboards and the modernisation of others (guitar and sitar, in the new transformation in zitar, elettrified and played in a very close-to-guitar way by Niladri Kumar).

THE PROJECT
Starting from this mixing and reciprocal influence, the project “The New Times of India” promotes the meeting and the cultural exchange moving just from that instrument, the western drumset, which among all, is the most distant from Indian musical tradition (strongly rooted in tabla, mridangam, pakhawaj and gatham, the typical percussions), but in which are more and more interested the Indian musicians sensitive to contamination between the two cultures.
The program will be articulated in two main directions, one with a didactic/divulger character, and another more specifically musical.
The musical proposal is based on "Tabla & Drums Connection" program, where the classical indian “Raga” is enriched and developed with the use of drum set, in constant dialogue and interaction with the tabla. By this way, yet in the respect of classical tradition, the expressive possibilities are enlarged, making a fusion of two different percussive sets , and so creating a further east-west bridge.
Drum set is the propulsive motor of western music (pop, rock or jazz), and its articulated set allows the use of all player’s physical structure, getting coordinated movements of upper and lower limbs.

The final phase of this project will be a series of live performances, in which will be presented the different way of playing the drums in various contexts (western music, classical raga, fusion music and musictherapy setting). The program, in the spirit of a 360 degrees communication, will find application as in Europe as in India, with Berlin as a starting point, and the sitar of Christian Nocon, the tabla of Mario Molle and the tanpura of Silvia Refatto. Then it will spread around, also with the precious help of Partho Sarothy, intelligent and mindopened to sperimentation musician and oriented to the meeting of different cultures.

All this project will be documentated in a musical CD. There will be also a DVD with a booklet in which will be resumed all the working phases, from the starting idea to the final products.