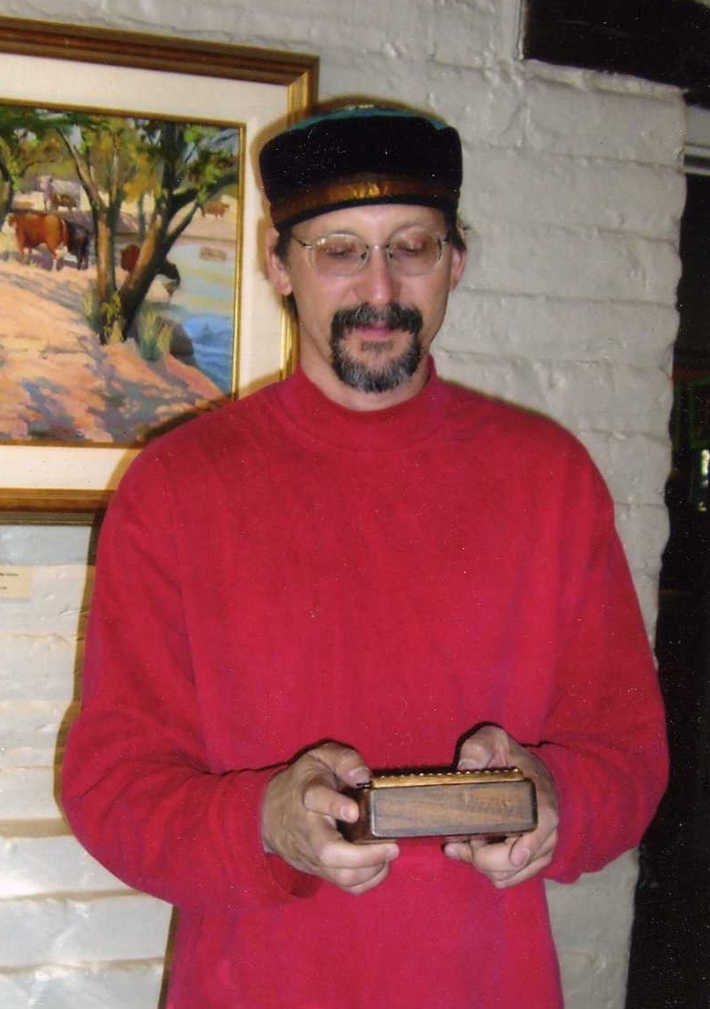 About me:
My undergraduate degree from MIT (1984) was in Humanities (course 21) - but I had concentrations in Biology, Geology, Chemistry, Math, and Physics. I have a PhD in Physics (Brandeis, 1990), and worked for 18 years at the National Radio Astronomy Observatory. I now run my own business, Kalimba Magic, which educates the world about the wonders of the Kalimba, or African Thumb Piano. I publish books on playing the kalimba, record CDs, and sell the books, CDs, and kalimbas on-line. My kalimba music is ground breaking and touches the genres of Classical, Folk, Rock, Pop, and World music.

Influences:
Well, I was influenced early on by Bob Dylan and the Grateful Dead, but my music doesn't sound too much like that. I suppose I am on my own path now.

A View of Overtones on the Kalimba

I was asked to join this overtones forum, and at first I thought this was a mistake, as overtones doesn't exactly describe what is going on with the kalimba.

First of all, vibrating strings or air columns have overtones which make a beautiful harmonic series - the overtones harmonize with the fundamental vibration, and they are called "harmonics". Now, an untuned marimba bar vibrates with overtones which are anharmonic. Good marimba bar makers tune not only the fundamental, but also the overtones. The first overtone is a bit less than one and a half octaves above the fundamental. The fundamental and overtones are tuned by changing the details of the distribution of mass and "springiness" along the bar - shaving wood from under the center of the bar results in a less-springy bar, which vibrates at a lower frequency. Shaving wood from around the nodes of the fundamental vibration mode (ie, where you run the strings through the bars) results in lowering the frequency of the first vibrational mode. It is nice if the first overtone can be tuned to an octave above the fundamental, or an octave and a fifth.

Just like the marimba bars, kalimba tines vibrate with anharmonic overtones. The first overtone is like 2.5 octaves up - actually an out of tune flat 6th over 2 octaves above the fundamental. When you first release a kalimba tine to make it vibrate, there is power at all frequencies - its a bloody mess! Over the first 0.1 second or so, the vibration starts to get organized, and you can clearly see that first "theoretical" overtone - I say that because on the Hugh Tracey kalimbas, the tines also vibrate at one octave above the fundamental - which was not predicted by the standard theory. In addition to vibrating up and down, there is a small component of motion in which the tines are "sawing" back and forth over the bridge at twice the frequency of the fundamental vibration - making the octave note. This sawing motion is instrumental in driving the "nasty buzz" which sometimes visits the tines (this is stopped by placing a piece of paper between the tine and the bridge). Anyway, this "nasty buzz" is all overtones, and not very musical. Typically after 0.1-0.2 seconds of vibration, the energy drains out of the anharmonic overtones, and what is left is a fairly pure tone - just the fundamental.

Most kalimbas are tuned to a western diatonic scale (ie, "Do Re Mi Fa So La Ti Do"), but adjacent notes in the scale are found on alternating sides of the kalimba. So, from the center towards the right, the tines might go "Do Mi So Ti", while from the center towards the left they go "Re Fa La Do". When you set one tine vibrating, it also makes the adjacent tines vibrate, as the vibrations carry through the bridge. Farther neighbor tines vibrate less. But the standard alternating side diatonic tuning means that adjacent tines always make a nice chord. If you played the "Mi" on the right side, you also excite "Do" and "So" to a lesser extent. That makes a 1-3-5 chord, so it sounds great. I call the adjacent tines you didn't intend to play "synthetic overtones". The fact that one of them is actually an undertone means that these are really different from overtones. But they fill the same role as overtones - they make the sound richer and more pleasing.

Now, kalimbas with air chambers often have little sound holes in the back and front. The air chamber has a certain resonance - usually a range of two or three notes on the kalimba which are twice as loud as the other notes due to standing waves in the resonant chamber. When you place your thumb or fingers over the holes, the resonant frequency of the air chamber changes, and now other notes are emphasized. So, if you play one note on the kalimba and actually get a range of nice harmonizing notes as synthetic overtones, and you then wave your thumb/fingers over the holes, what you are doing is emphasized and deemphasizing different of those synthetic harmonics, making a cool "wah wah" sound while you do.

A similar thing is happening with the Sansula, a recently invented kalimba from Peter Hokema, a fellow member of this network.

So, I guess I am just too pedantic for my own good.

I have one more techno-rant like this one, and then I'll get down to making some art. -Mark Holdaway

Jens Mügge said…
Hi Mark,
thanks for joining us - I like your style to teach the sansula very well. Hope I can learn about this instrument. See you!
Jens