Permalink Reply by Skye Løfvander on February 14, 2010 at 11:09pm
Marmorkirken/ Frederikskirken ('Marble' Church/ Frederiks Church)
Fifth in size among domes in Europe and with a remarkable reverb of about 9 seconds.
I had my debute as concert arranger here in 1996 (where Copenhagen was the European Culture Capital) with the concept of a summit in music between the five continents: Asia, Africa, Australia, America and Europe. Unfortunately I don't have the sound recordings from that event. Even though the church is open to the public in the day hours it is a bit difficult to find time and place for improvised singing and the staff is not too open to the idea... but they gave the opportunity to Christer Irgens Moeller 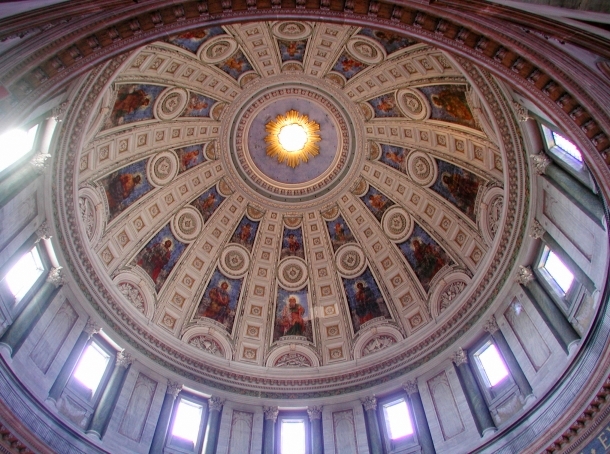 Permalink Reply by Skye Løfvander on February 14, 2010 at 11:49pm
The echo temple in the Haga public park in Stockholm is not a three Michelin star acoustic experience, but it is situated idyllicaly, is always open to public and after all an established acoustic attraction. Watch this YouTube video

Permalink Reply by Skye Løfvander on February 15, 2010 at 12:30am
The caves on Nólsoy and Hestur Faroe Islands.
During the last few years, Birgir Enni, skipper of the vessel “Norðlýsid”, and Kristian Blak have arranged trips with musicians and audiences to caves, into which - weather permitting - one can enter in smaller boats. These events have taken place in collaboration with the festival Summartónar, which brings visiting musicians, together with local performers, to these very special “concert halls” utilizing the natural sounds and unique acoustics of the caves as integral parts of the music. Karsten Vogel (as) Kristian Blak (keyb).
Soundbytes on iTunes, this link! 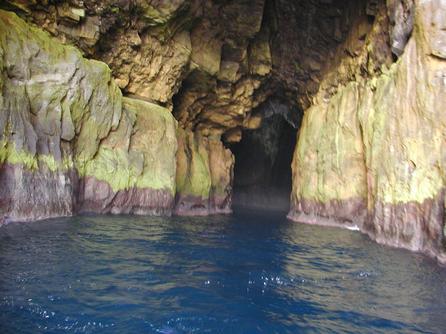 "Caves have been compared to cathedrals and the similarity is obvious. A tiger may, in the same way, be described as a pussycat! Old cathedrals clearly aim towards an effect similar to that encountered in large caves; yet in spite of their spacious power, Nôtre Dame in Paris and the cathedrals of Cologne and Trondheim are nothing more than the tame work of man when compared to this overlooked Faroese northern sea cave. Its rough walls, green light, the sacred glass-sound of the sea within are all, without consecration and ritual, even without faith, simply by virtue of themselves, something sacred.
And there must be hundreds of caves of this kind… …they are simply anonymous holes in the cliffs that gape out to the open sea. The surf thunders in them all through the winter, filling them with water and darkness and compressing the air to a terrible pressure, until the light suddenly returns as a roaring explosion that may be heard far away. This is Nature at work, the sea drilling with its pneumatic hammer, and no one can possibly witness this frantic drama at close quarters. But in a single unpredictable moment the sea calms and then the gates to the Underworld stand wide open. Man may, like Orpheus, go in and look."
—Jørgen Frantz Jacobsen, Handasta land, 1936

Permalink Reply by Skye Løfvander on February 15, 2010 at 12:43am
Audonicon, Skanderborg, Jutland.
An extraordinary acoustic temple, conceived by the visionary danish antroposophical pioneer and architect, Holger Mellerup, but the interest both in antroposophical education and cultural events seems to have declined.
I have given two concerts here in the big hall, one with Ashish Sankrityayan, one with Elin Overgaard. 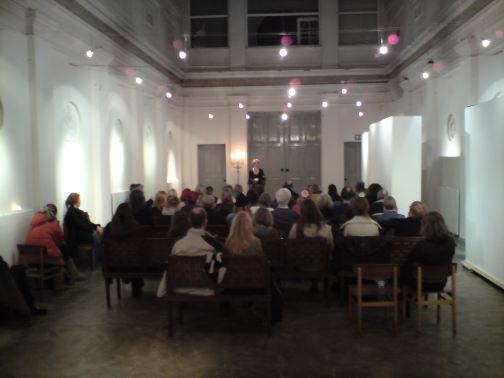 Permalink Reply by Skye Løfvander on February 15, 2010 at 1:11am
The Geological Museum, Copenhagen
... has two domes: one right at the entrance, the other a little remote at the west wing of the museum where the traffic of museum guests is very light, leaving good opportunity to give some sound without disturbing anybody too much. The acoustics is not very spectacular but the museum is still worth a visit if you happen to be in central Copenhagen. The dome in question has been decorated by famous artist Per Kirkeby in 2004. 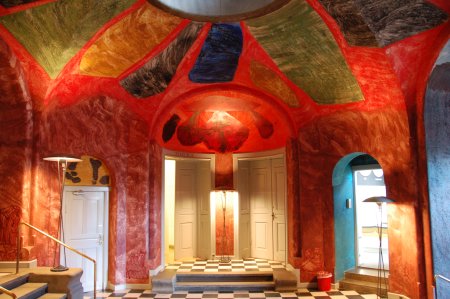 Permalink Reply by Skye Løfvander on February 15, 2010 at 1:19am
The Silo, Neon Gallery, Brösarp. Österlen.
Nothing to plan a travel for but definitely worth a visit if you are already in the area, also because the neighbouring modern art gallery frequently offers interesting exhibitions. 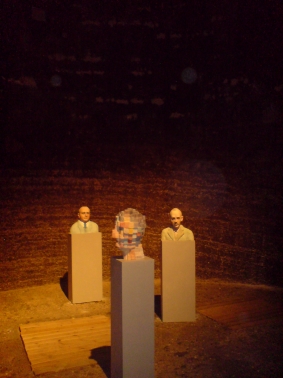 Permalink Reply by Skye Løfvander on February 15, 2010 at 1:33am
The waiting halls of many danish train stations have interesting acoustic properties as a result of open space with naked walls. One example is Aalborg Station. 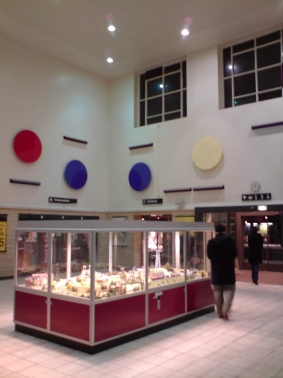 Permalink Reply by Skye Løfvander on February 15, 2010 at 2:04am
The Palm House, The Botanical Garden of Copenhagen
I have arranged more than a handful of concerts in the big Palm House: For various bamboo flutes, for zen music, choir etc. The combination of the hard glass windows reflecting everything straight back and the plants absorbing and redirecting the sound gives a surprisingly pleasant sound.
At this link is a sound byte of an improvisation by members of the Sound Association GONG as part of a one day acoustic excursion in Copenhagen. It is from the upper balustrade amidst tropical plants and outing families. All of them cheered and wanted to talk afterwards. 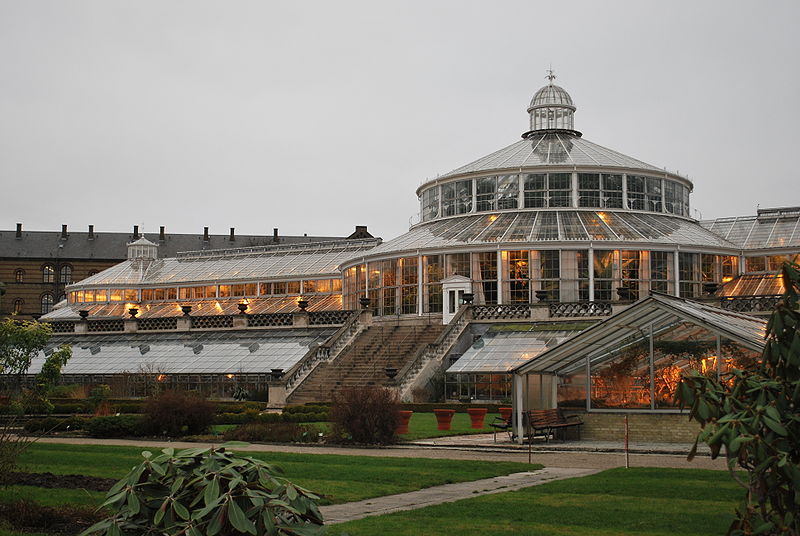 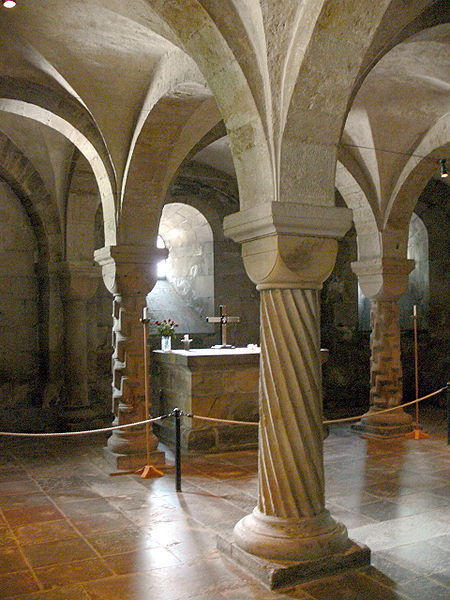 Here is an image from the crypt.

Permalink Reply by Skye Løfvander on February 15, 2010 at 3:01am
The Round Tower of Copenhagen.
During the last 12 years I have arranged half a hundred concerts in the Round Tower. The appearance of this renaissance building, which was originally a observatory, is so characteristic that it is probably the best-known building in Denmark. It has a beautiful exhibition and concert hall which is excellent for unplugged music. Overtone singers Nikolaj Flor-Rotne, Henrik Øhlers, Gösta Petersen, Ensemble Zeismos, Ensemble Volare, David Hykes, Hosoo & Ensemble and Wolfgang Saus have performed here.
The most fascinating part of the building is the 209 meters long winding, white-washed Spiral Walk, which in the day hours tend to be filled with the voices of children, but I have had the good fortune to create several events where we took advantage of its unique acoustic properties. The spiral has 7½ windings, so at the exhibition 'Spiral Tonality' in 2008 I installed the first 7 octaves of the harmonic series, 128 tubular bells extended round the core, whereas the more culturally conditioned tonal systems could be found in the hall. You may find pictures from that event at this link. 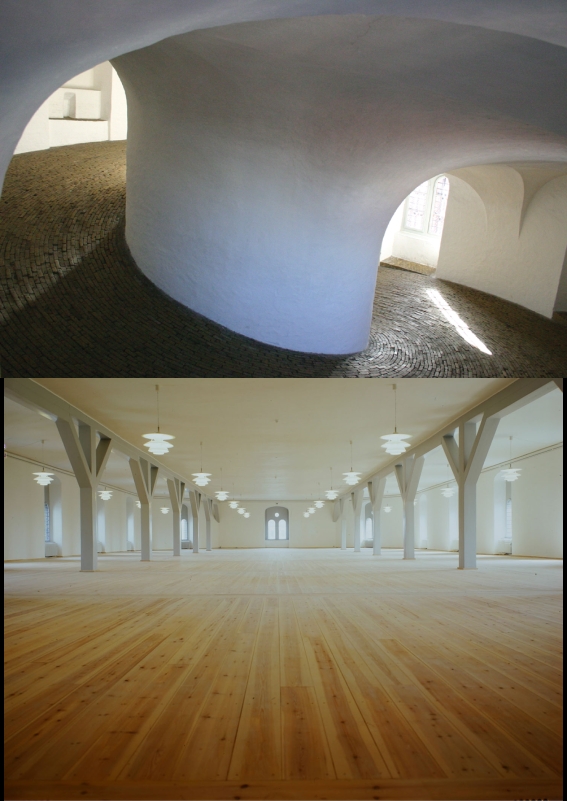 Permalink Reply by Skye Løfvander on February 15, 2010 at 12:17pm
Valby Gassilo/ Gas Tower,
Absolutely stunning acoustics in the 108 meters tall tower. Unfortunately the municipality are very reluctant to open it except for very rare special occasions, but I am working on this issue. Do watch this video and try to imagine what the sound would be like when instead of random noise it could be filled with music from someone knowing how to use the resonance.

A photo by Aionigma was featured

OM! You often feel unstable and powerless? Then listen to the sounds of the sitar. With this raga, Ram Vakkalanka activates your root chakra and helps you to...
Jun 1
0 Comments