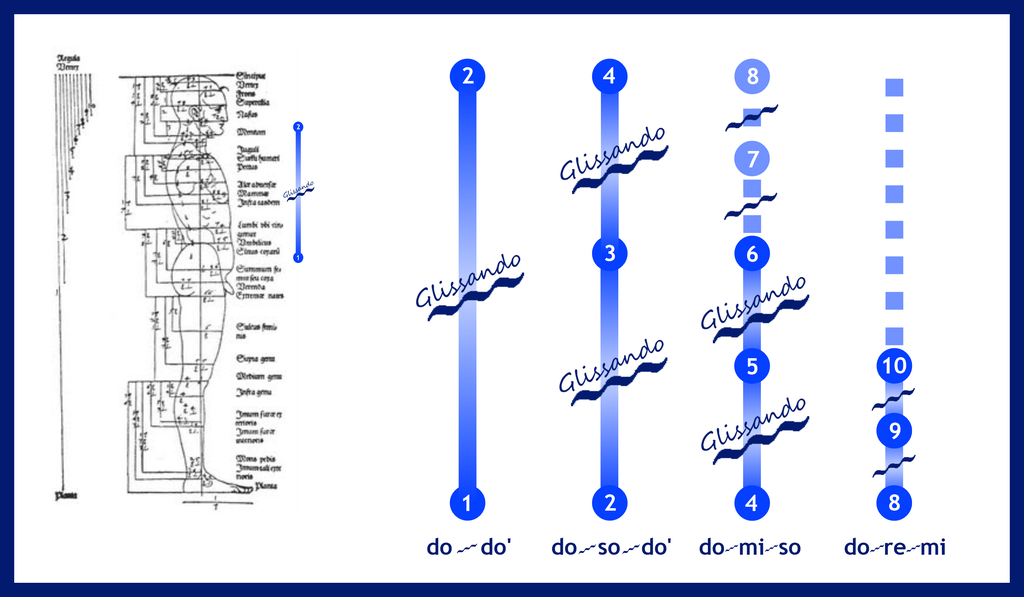 With thanks to Albrecht Dürerfor the proportion study.

The harmonic series is the one universal pattern in music, so it seems obvious to use it as a basis for singing exercises with glissando: the gliding tones in music. Partly it may awaken our senses to the pure intervals, partly it may sharpen our attention to all the interesting things happening between the notes!

The exercises do not demand any special overtone singing skills, so all vocalists can benefit from them.

In case you want to proceed straight to the exercises, you may ignore the text in italics underneath.

One of the things I have become increasingly aware of though my collaboration with a remarkable representative of the oldest Indian sacral vocal tradition is the European tendency to relate awkwardly to music: the movements between the notes mostly happen from one fixed point to the other, rarely with the organic fluency and flexibility characterizing dhrupad and it must be emphasized that these latter tonal movements are anything but random.

In combination with our decennial tradition for music notation, European conditioned music has a tendency to crystallize, the notes becomes fixations which urges us from time to time to shake up the stiffness with swing, beat, rock'n'roll, free tonality etc.

Modern music has generally speaking forgotten the wealth of ornamentation and embellishments which were a vital part of classical music in order to subtly soften up the rigid tonal skeleton.

A tonal expression is brought alive by its nuances – where do you see the contours inside the rainbow?

Actually natural points of orientation do exist within the frame of music but they are not fixed, rather a movable simple yet subtle structure known as the harmonic series, which accompanies any sound from voice or instrument. Every note contains frequencies 2, 3, 4,... times the frequency of the fundamental note, and these harmonic overtones are our deepest universal reference for the experience of intervals.

Thus every prime number incarnates a musical function through the harmonic series, and we hear it all come alive in its complexity in the sound of voices and instruments:

A flute has a simple overtone spectrum, whereas a trumpet has a very full.

Some instruments accentuate mostly uneven elements of the series, other the even elements.

The exercise falls naturally in stages which each may be divided into steps:

First we need to clarify the frame, the octave, proportion 1:2, do:do'.

Find a comfortable pitch where you can easily span the two notes, and then sing them separately a few times.

Next step is the core exercise: to glide very slowly and attentively on one long breath from the deep note to the high. It should be done so smoothly, evenly and effortless as possible, yet attentive. Also do the exercise in reverse: from the high do' to the low.

It sounds simple but there is no reason to consider it merely as warm up, it may be refined forever.

You may apply gesture as well, raising both hands slowly along with the rising note from the lower part of your torso to face level.

Second stage has the same basic frame but within the octave 2:4 the factor 3 enters the stage: the perfect fifth, so.

This does not mean that should start from the higher octave pitch but simply take off from the same starting point as before.

Find the do-so-do' sequence and sing it arpeggio (broken) a few times.

You may sing all the permutation of the three notes:

After that you go to the glissando exercise:

Establish your pitch and glide slowly upwards while attentively listening. When you reach SO (or what you believe is do) let it sound for some time and the proceed gliding upwards till you reach the upper do'.

It is not illegal to use a reference instrument, but do try to make the exercise without if you can.

Do the exercise a few times upwards and downwards. Listen! It is not as easy as it may seem as most of us are not accustomed with listening for tonal orientation points while gliding.

Third stage is an exercise in subdividing the fifth interval, 2:3, which we have now become acquainted with. 2:3 = 4:6 and here 5, the just major third, mi, enters the stage.

Again you may start from the same basis pitch.

The permutations are as follows:

Slowly doing the gliding exercise here will lead you to a first hand experience of the nature of micro-tonality.

Be aware that permutations of three elements are six in number, but if you have four elements it grows to 24 and five becomes 120. You will need most of a day to sing all the permutations of seven notes!!

A photo by Aionigma was featured

OM! You often feel unstable and powerless? Then listen to the sounds of the sitar. With this raga, Ram Vakkalanka activates your root chakra and helps you to...
Jun 1
0 Comments