In the Indian source texts about chakras and in traditional imagery, there is relatively much agreement on their location and the number of petals of the lotuses, so it is partly understandable if some tend to believe that these traits have their background in the hidden constitution of man – in subtle 'bodies' which may be observed clairvoyantly. I would advise those folks to realize that there many chakra systems in the old traditions and that they attribute the chakras with very different colours and number of petals. 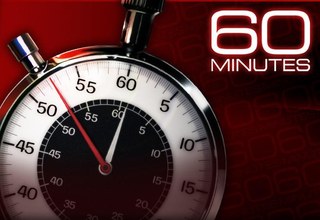 And even more striking of the most widely used model is how the structure testifies to a mindset penetrated by a sexagesimal (base 60) number system. We usually associate this system with the Mesopotamian cultures, and we still bear witness of it on our left wrist with the dial divided into 60 minutes and seconds. 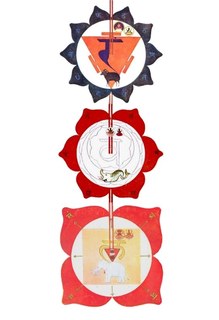 If you start counting petals of the chakra lotuses from the base: 4-6-10, a mathematical mind can not fail to notice that these numbers are doubles of the first three prime numbers: 2x2; 2x3 and 2x5. It is an arithmetic statement which  invites to further investigations.

Primes will be central in the following; they are the numerical 'atoms' in a system where all other integers can be seen as 'molecules', composed of atoms. The molecule 60 is thus composed by the atoms 2, 3 and 5 (2x2x3x5).

If you even have some sense of how music arises in the harmonic series, which precisely can be considered as integers expressed in music, you will know that 2 (the ratio 1:2) mirrors the octave; 3 mirrors the perfect fifth (2:3), and 5 mirrors the just major third (4:5).

Listen to the harmonic series here! 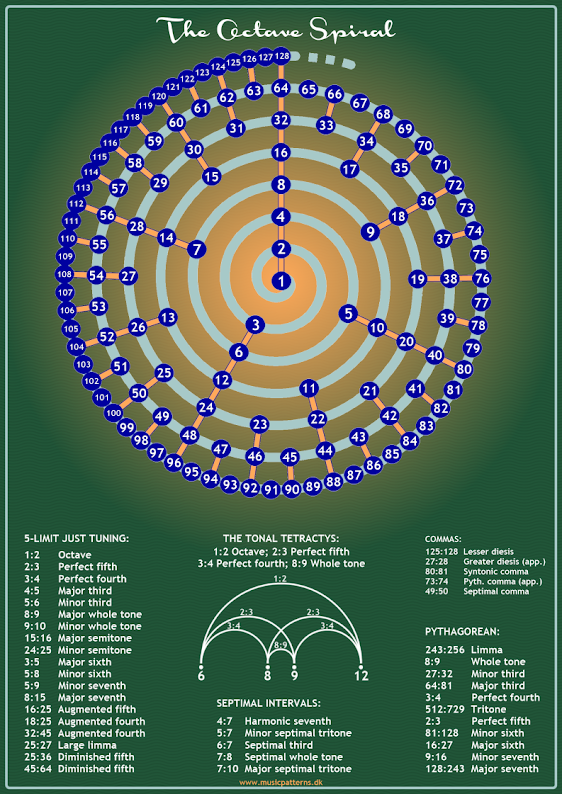 The octave spiral is a mapping of the harmonic series. Each revolution of the spiral corresponds to an octave (1: 2). For each new prime, a new tone quality occurs. At http://suonoterapia.org/overtones/ you can hear how the tones sound on the interactive graphics that Marco Gianotta has programmed.

The Whole and the Parts

Geometrically, it is also beneficial to relate to a whole of 60 (or 6x60 = 360, like the degrees of the circle). Just look at the fundamental polygons which are hidden in a good old fashioned wrist watch: 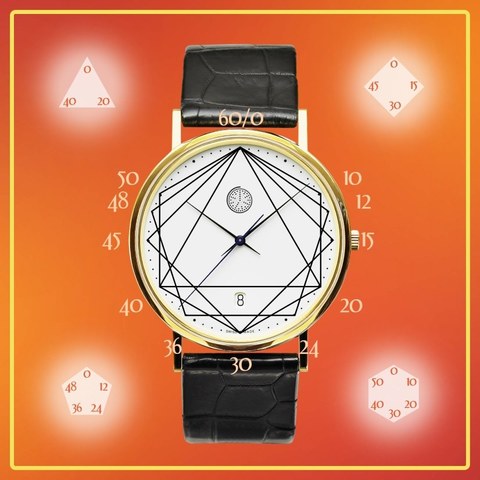 Gods, Number and Music as One!

It is hardly pure speculation to assume that the old Mesopotamians not only used the system on everything measureable,  but had established a holistic mindset which included planets, time measurement, gods and ... music.

Consider the Mesopotamian parnassus of gods, who are speaking in a strong and elementary mathematical-musical language:

Images of the gods are known in particular from the cylindrical seals and their imprints in clay. The correspondence between numbers and gods could vary slightly, but basically it's about dividing the whole, the totality, 60, in the simplest ways. In some systems, multiple of 10 are male, while the female are divisible by 5 (15, 25, 35, ...). To understand the music of this, we shall study the culture-bearing monochord (no, it was not 'invented' Pythagoras, but it is certainly not impossible that he traveled to Babylonia and learned there as Iamblichus wrote).

For a string length of 60 units – be it inches, centimeters or anything – in the octave between 30 and 60, a major scale appears, whose elements all belong to the so-called Just Intonation. That is, the notes are ratios which appear by divisions of the string in 2, 3 and 5 units, respectivly ... the first three prime numbers mentioned above.

Link to the demonstration monochord of the header

On the beautiful bull headed lyres, which have been found in the home town of the biblical Abraham, every string was devoted to one of the gods. This is a replica.

Now we should be ready to view the chakra number system from a music perspective, which gives us an image which may not have been conceived by higher intuitive seeing, but is woven into cultural contexts. The vital question is not whether the one sequence 4-6-10-12-16-96-1,000 is more or less correct than all the many other interpretations of the 'frequency' numbers of the chakras (the old Indians did not interprete in terms of 'energy' and 'frequencies'), but what was intended by their authors.  The reason for the interconnection between the hexagesimal number system and the chakra system, and whether the musical language has been chosen deliberately. This is worth reflection and study.

I do not think that the tantrics of ancient India meditated at these musical intervals in the context of the chakras, as it is not evident from the sources, but I am quite convinced that over a large period of time there has been the exchange of mathematical ideas and views between Mesopotamia and India. See, for example, Kim Plofker's Mathematics in India, chapter 2.5 and consider the large numbers attributed to Indian cosmological time cycles of yugas and kalpas. 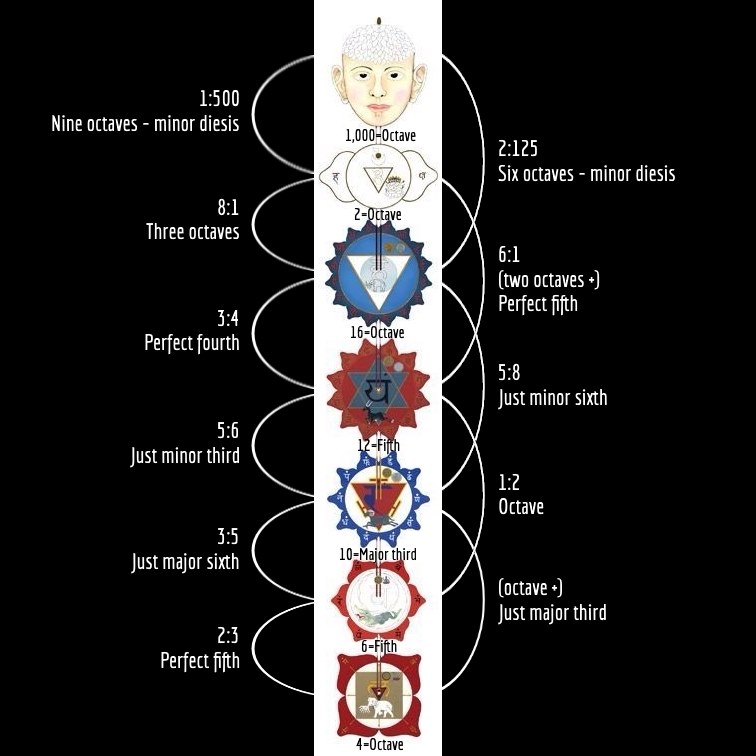 In the diagram is distinguished between intervals as functions and steps: Black font under the symbols are functions; white writing between the individual functions are steps.

The spectrum of tone frequencies that the human ear can perceive is often indicated as 20-20,000 Hz, equivalent to barely ten octaves, and a concert piano spans a little more than seven octaves, so musically speaking, the frequency band is absolutely appropriate. 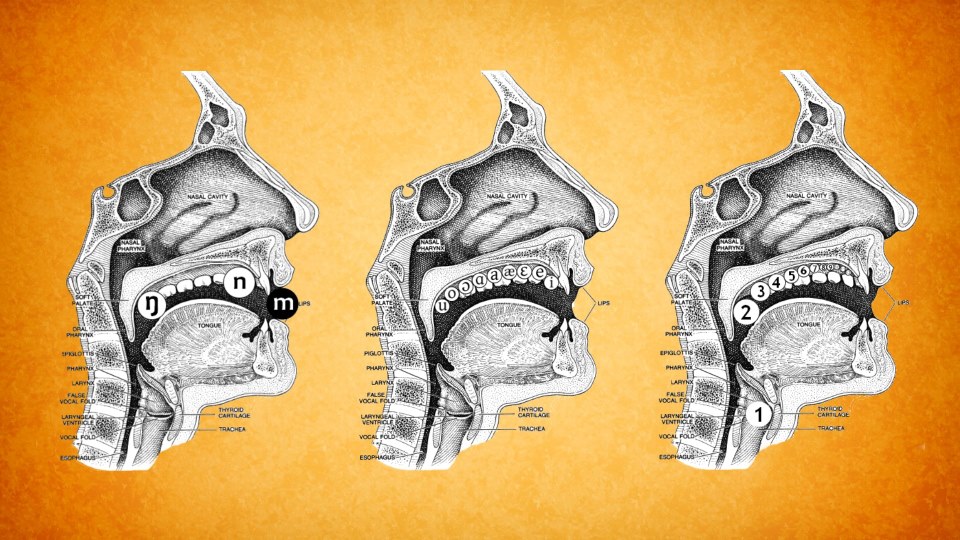 Each chakra is ruled by an element. The five mahābhūtas have their roots back to the rise of sāmkhya philosophy before common era: Earth, water, fire, air and ākāśa ('radiance' or 'space', often translated as 'ether'). Later, these elements were incorporated into the chakra system and each corresponds to a socalled bīja (seed) mantra:

Lam-Vam-Ram-Yam-Ham-Aum is the sequence from base to brow. With the consonants L, V, R, J (as Y is obviously pronounced in the context) and H, the meditator will be guided to explore his vocal tract.

Bīja mantras and most other mantras end with one of the three nasals / humming sounds: m, n and [ŋ] (the ng sound, which is more fundamental than the alphabet indicates). It is a meaningful, sound based way to relate to the language when going from an open vowel towards a nasal, and it certainly supports the experience of the mental direction inward. Other spiritual traditions have also been aware of the three primary nasals, and if you think about it, it will surely give MeaNi[ŋ]. The word mantra has the same linguistic root as man ... and meaning! Manas refers to mind, so mantra should be the mind's tool, not a hypnotic strip. 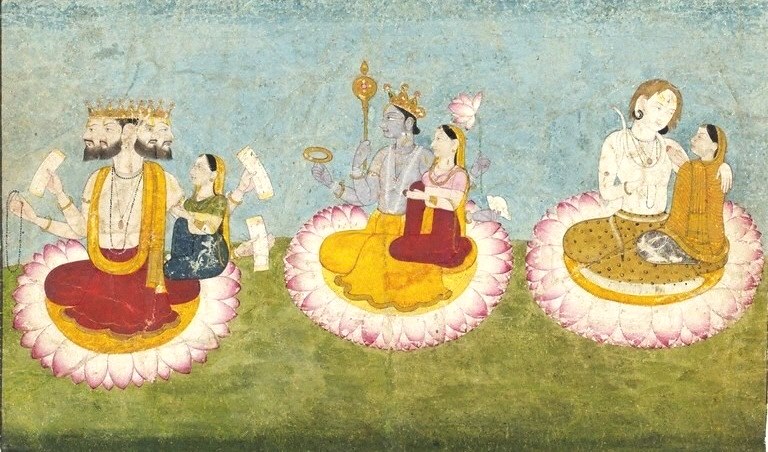 ... is the mantra par excellence, which in the context of the spirituality of the Upanishads represent creation on a cosmical scale. It presides over the brow chakra and is reproduced in sanskrit by the three characters A-U-M, which among other aspects relate to the Trinity Brahma-Vishnu-Shiva (Trimurti).

At the same time, from a purely phonetic perspective, AUM is a fundamental organic sequence of rounded back throat vowels from the most open [α] towards the most narrow [U] which inevitably leads to an ending in the nasal M. A musically trained ear will typically hear accentuated elements of the harmonic series from around #6-8 stepwise downwards when the vowel sequence is intonated with precision.

Below a reproduction where I have sung the sequence with accentuated harmonics in the program Overtone Analyzer, which translates sound to spectrography.

A similar organic sequence from the most open [α] sound to the nasal / humming sound [η] goes via [a]-[æ]-[ɛ]-[e]-[i] and can be reproduced in compact form as AING, the mantra of the goddess Saraswati. 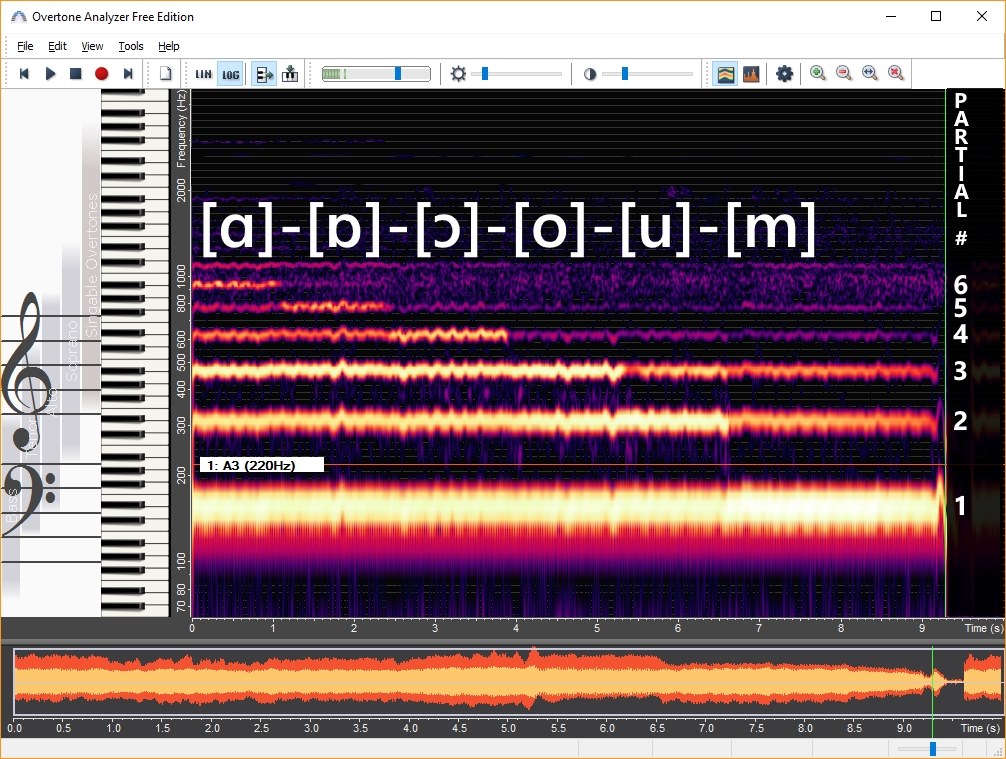 So it's not only the Indian gods who may appear to us with three heads. As I understand the word sound (Scandinavian / German: Klang), I am facing three very fundamental expressions of life:

... and it may also have to do with the chakras. 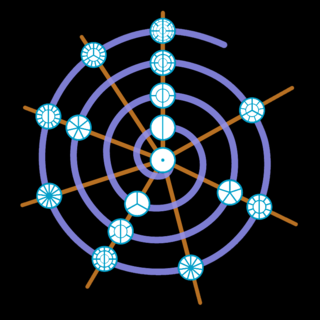 The octave spiral, which illustrates the correlation between speech and harmonics. An Interactive version is available at http://suonoterapia.org/overtones/.