My first encounter with sung overtones was in 1969 at a performance of Karl Stockhausen's "Stimmung" ("Mood") in the studio of the Beethoven Concert Hall in Bonn. The atmosphere created by the entirely new way of handling vocal sounds made me astonishingly alert and curious although I had always enjoyed singing, and had sung a lot, my main interest up until then had been in playing instruments. Just as I had recently heard synthesizer music for the first time, and had had the opportunity to play such an instrument for the first time I ended up experimenting with the voice. In 1972, l experienced Michael Vetter with his wife Atsuko in a concert in the Bonn Center, how he explored the possibilities of the voice with overtones and vocal color using intuition and improvisation. Once again, I was fascinated, this time by how natural deep and matter-of-fact this musical playing was in its subtle possibilities. I visited him frequently and in playing together, I recognized, among other things, the basic ways of making overtones audible by means of sung tones. 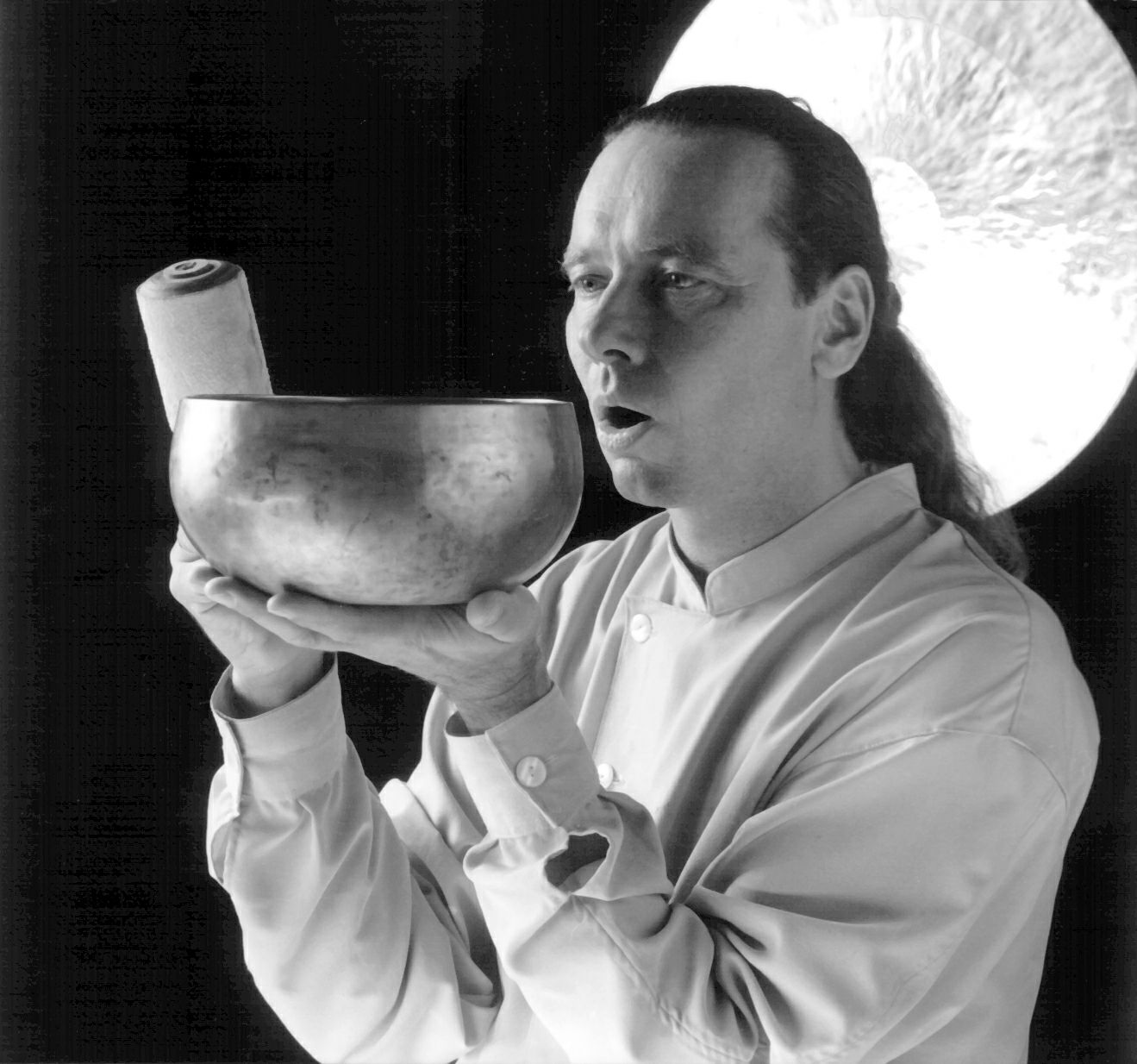 During my studies at the Conservatory of Music in Cologne from 1972 to 1980, I concentrated not only on the traditional curriculum, but also on jazz and new music, later on composition, new music theatre, and electronic music. During this time, overtone singing was a kind of "musique privee" a musical form of meditation, in order to recover from the shock of my education, and to encounter once again my own most inner music freely and with inspiration. After some wild times in the most varied constellations, I decided to take time to reorient myself and to find out what I really wanted.

The first thing was to set up seminars for meditative creative music, in which the voice is the center of attention as a "biological organic synthesizer", and thus overtone singing as an important element. Breathe, movement and voice as a familiar and direct instrument in which all participants are equally able to gather musical and human experience, which can be easily applied, to instruments. The second thing was the dream of a small studio, in which I could try out and realize my musical ideas whenever I wanted to. Along the path of working with these two "instruments", there came into being a group for singing overtones, the Workshop Choir, as well as music for theatrical and film productions choral compositions for Antigone the Bacchic, and plays of Aristophanes "Aquamorphose", the piece about the sounds of water with Christoph Müller, and the first compositions for the "Overtone Choir Düsseldorf", which I founded in 1985.

The Overtone Choir Project 90 was formed in the autumn of 1989 to continue the idea of the Overtone Choir Düsseldorf with a large ensemble. The goal of the project is to go together along a path of elemental musical work, and to grow in the experience of community and coming to terms with musical structures, compositions, and free improvisations, with the focus on the overtone series. In consciously dealing with these musical aspects, also contain aspects of social, spiritual, and personal growth (experience of self, group, concert, and recording situations), the universal laws of music become clear, and form the process of personal and communal growth.


Introduction - Possible contents of a lecture

The overtone music which is composed and performed by Christian Bollmann may sound exotic to some ears - it is interesting to note, however, that it has its roots in European musical culture. Early western music was, like the music of all other cultural groups and peoples; shaped by overtones this was especially true for the tone quality of vocal production, as well as the ideal timbre of instruments. The music was oriented towards the fundamental, in other words, exclusively directed at a middle point. Thus the desire of the people of that time to praise the one God and become one with Him found expression in this musical analogy. One example of this is found in the singing of Gregorian chant. It stays entirely within the modal boundaries of the church modes. If one listens to this singing with concentration, it is possible to perceive the overtones.

In the course of cultural development, musical aspirations changed. During the Baroque period. For instance, composers wanted to take long harmonic journeys. However, longer modulations could only be carried out within limits, because of the pure tuning. The reason is as follows: if one piles pure fifths on top of each other, as is familiar from the image of the circle of fifths, one does not arrive back exactly at the starting point, but instead at a tone that is a bit higher. To think of it spatially, it means that the circle of fifths is, according to the pure harmonic tuning, a spiral- a three dimensional evolutionary structure! This system, however, could not be applied to keyboard instruments.

The spiral gets flattened

Someone finally came up with the idea of dividing the extra note left over from the piling up of fifths into twelve equal parts. Then the parts were subtracted from each fifth, and thus a circle of fifths was created with an even temperament, which differed only slightly from what the ear was accustomed to hearing. To make the spatial analogy again, the formerly three-dimensional overtone spiral was reduced to a two dimensional circle- the spiral was literally banged flat. As a result, composers could finally modulate endlessly, and Johann Sebastian Bach could write his "Well tempered Klavier".

There was another problem: the new circle of fifths did not match the other voices and instruments with their sounds full of overtones. The overtones of the instruments competed with the slightly changed tempered intervals of the keyboard instruments. As a result, new instruments with a "slimmer" sound were built and at the same time, the sound ideal of singers was changed. Most overtones were consciously avoided. They disturbed the new tempered system. A new sound aesthetic predominated and determined musical events. Johann Sebastian Bach brought counterpoint to its culmination during the Baroque period. The masters of all following musical epochs reached comparable heights. In the meantime, the serial composition technique was taken over by composers and listeners in the analytical and scientific consciousness of modern music. In this musical landscape, experimental music began, with the help of unusual instruments and newly developed synthesizers, to place single tones at the centre of attention. The natural result was that overtones, suppressed for so long, were able to unfold fully. Revived in this way, they became the real plaything of music.

The voice as instrument gets rediscovered

At the end of the 60's, in a phase of reduction, contemplation, and the development of minimal music, several composers, in different parts of the world, discovered overtones invocal sound simultaneously. Karlheinz Stockhausen made a special mark concerning them. In his composition "Stimmung", written in 1968 for six vocalists, he showed an entirely new way of working with the voice. Michael Vetter, who was working with Stockhausen at that time, developed his "way of the voice" in the area of improvisation and meditation. In 1975, David Hykes founded the Harmonic Choir in New York.

Christian Bollmann founded the Overtone Choir Düsseldorf in 1985. His compositions and performing instructions contain meditative as well as dynamic aspects. In addition, there are elements that flow from the modality of Gregorian chant, jazz, and other assimilated forms of world music into his works. In the course of years, an independent western overtone culture has developed, which carries on the heritage of the most ancient, original form of music. This original form of music is the root of all musical cultures. It is based on tone, with its inherent law of the overtone series. This overtone culture is also a current in new music. It has moved away from the dissonant and spectacular into the meditative, spiritual domain. The aspiration of this music has been broadened. Thus is the healing quality of these sounds being increasingly holistically explored and included in the compositions.

Many people, upon hearing consciously sung overtones for the first time, speak enthusiastically about sounds of the spheres, which extend brightly and colorful over the listener like a rainbow Like white light, which is sent through a prism and is broken down into its spectrum of colors, the overtones dance delicately and as clearly as a bell, not to be located around the fundamental produced by the singer or instrument. Those who enter the world of overtones find themselves on a many - dimensional acoustical voyage of discovery. The singing of one's own overtones or contemplative listening leads to internal and external soundspaces, which lead into meditation and also have a harmonizing effect on body, soul and mind. The resulting holistic healing effect is used among other things in medicine. A clinic in Hamburg, for instance, successfully treats cancer patients with the overtones of a special Sandawa monochord.

All notes consist of several parts: a quantitative- the pitch, or fundamental, and a qualitative- the timbre, the overtones. Because of these characteristics, not only the absolute pitch is recognizable, but also the source, be it a piano, an aeroplane, or a blackbird. The individually characteristic timbre is determined by the dominance of individual overtones, the so-called resonance frequencies that vibrate along with the fundamental. Physically, the overtones have an undivided numerical relationship to the fundamental (1:2:3:4 etc.). However, only a few of these overtones correspond exactly to the evenly tempered scale, which is customarily used in western civilization. The higher the overtones get, the more they deviate from it. However, in other cultures, many intervals are derived from overtones.

Overtones in the series of analogous, harmonic laws of nature

The astonishing analogies of overtone intervals to other physical magnitudes, such as the astronomical revolution period of planets, the biological construction of the body, the architectural proportions of the Egyptian pyramids or Gothic cathedrals, the biological construction of the body, and to quantum and atomic physics, have occupied the world of science for thousands of years and place overtones in the series of analogous, harmonic laws of nature.

Pythagoras, a monk, and overtones

In the European cultural region, it was Pythagoras who, living and teaching in a spiritual community, recognized the musical I mathematical transcending realities of overtones. The actual existence of overtones themselves was, however, proven by the French monk Mann Mersenne as late as 1636 and scientifically demonstrated by Josef Sauveur around 1700. These days, overtones are being examined as examples of universal harmonies from around the world at the "Hans Kayser Institute for exploration of the basis of harmony" at the Musikhochschule (college of music) in Vienna.

Feedbacks on his music

Comment by Chris Amrhein on March 29, 2008 at 12:05pm
Wow christian, this is a deep view in your overtone work.
You are a father of overtone singing in Europe. Thanks a lot for this.
Love and Light to my Brother!