R.I.P. Link on Overtone Singing with about 100 clips 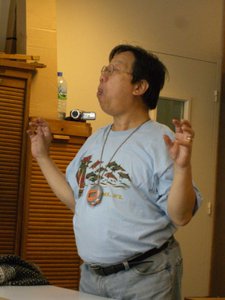 Overtone singing is a vocal technique found in Central Asian cultures such as Tuva and Mongolia, by which one singer produces a high pitch of nF0 along with a low drone pitch of F0 (F0 is the fundamental frequency, n = 6, 7, ...13 in typical performances). The voice of overtone singing is characterized by a sharp formant centered at nF0.…

R.I.P. TSAI Chen-Gia: Physical Modeling of the vocal tract of a Sygyt singer

Physical Modeling of the vocal tract of a Sygyt singer

Two types of overtone-singing should be distinguished: Sygyt and Kargyraa. In Sygyt performances, the rising tongue divides the vocal tract into two cavities, which are connected by a narrow channel, whereas the tongue does not rise in Kargyraa performances.

Up until now, two major theories have been proposed on the production of the… Continue

Voices of overtone-singing differ from normal voices in having a sharp formant Fk (k denotes Kh??mei), which elicits the melody pitch fk = nf0. For normal voices, the bandwidths of formants are always so large that the formants merely contribute to the perception of timbre. For overtone-singing voices, the sharp formant Fk can contribute to the perception of pitch.

Lokah Samastah Sukhino Bhavantu is a Sanskrit mantra which means: “May all beings everywhere be happy and free, and may the thoughts, words, and actions o...
yesterday
0 Comments

Jew's Harp of the World

Ilaria Orefice is now in contact with Hans Tschiritsch

A blog post by Mark van Tongeren was featured