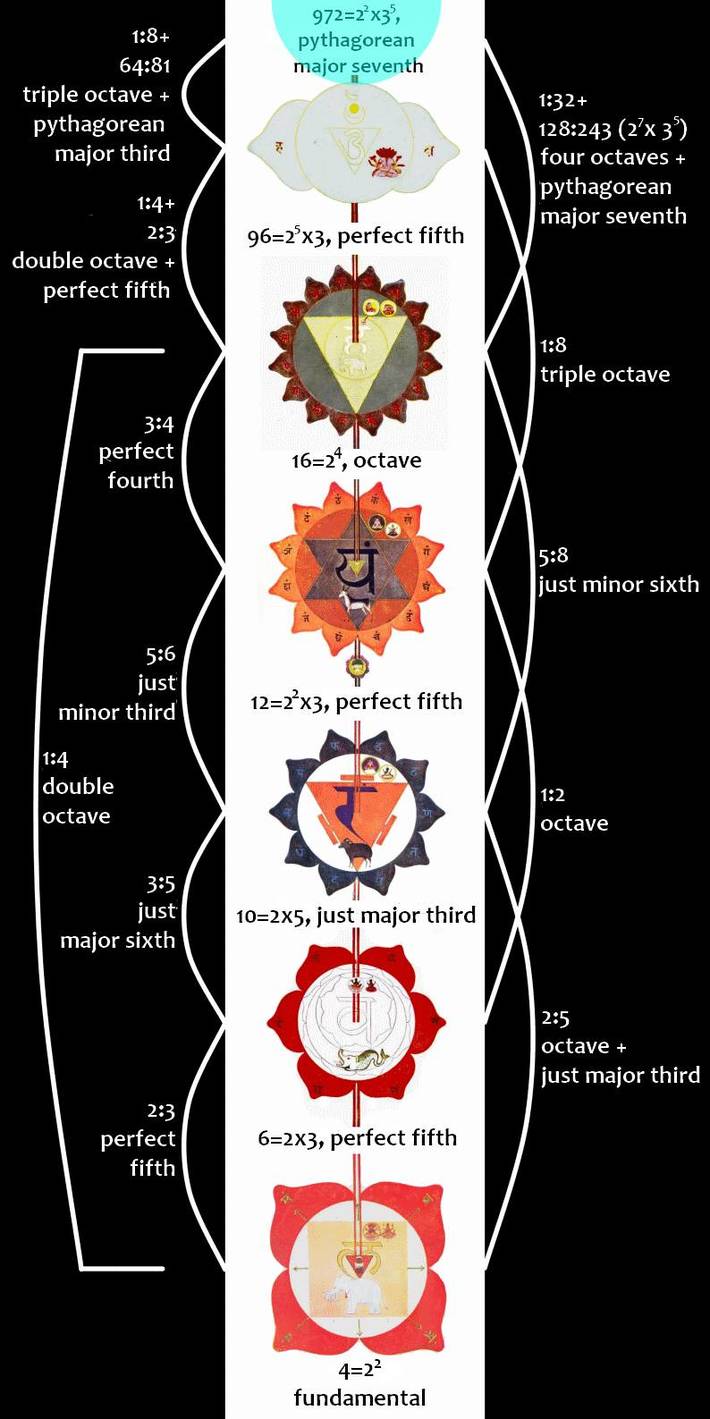 In the tanric tradition the chakras are often depicted as lotuses with a variable number of petals. The most commonly refered to series is 4-6-10-12-16-96-972, but it is important to realize that history has seen many different systems. and that the written sources to the concepts are much later than most spiritually orientated people tend to believe. Nothing explicit is written about chakras neither in the vedas nor the Bhagavad Ghita nor the Yoga Sutras. The concept became well established during the time of mughal rule of India, which many of the aesthetically appealing diagrams derive from. What is necesarry is reflections about the cultural context of chakras, also mathematically, instead of understanding their structure as something absolute, an authoritative revelation. The above mentioned number sequence curiously belongs to the basic sexagesimal calculation system, which thrived in Mesopotamia thousands of years BC. It is based on the prime numbers 2, 3 and 5 which from a musical perspective through the harmonic series are equivalent with octave, perfect fiffth and just major third respectivly (NB! in the written order!). In these ancient cultures music, arithmetics, geometry and astronomy were evidently parts of a holistic approach which all in all may seem less speculative than modern new age imaginations. In the video the numbers are interpreted as frequencies whereas the ancients would have calculated string lengths (which would give the reverse side of the same structure) or fractions of string lengths which give the equivalent of the frequency structure. Please notice that the piano in the sample is not tuned equally tempered but in just tuning, which preserves the pure music of the integers! The chosen frequency for the starting point, the 4 of the root chakra is C=32 Hz. The ending major seventh, close to eight octaves above our starting point, should actually be one octave higher than here.
More to be found (in danish) at: http://www.kortlink.dk/7ccw

Download 3 Days of Healing Music For FREE at http://matthewmusic.net Recognized as a leader in the global sound healing movement, Matthew Kocel is a throat s...
Wednesday
0 Comments

Download my Healing Music Series for FREE at https://matthewkmusic.com For best effect please listen with headphones or good speakers with no distractions. O...
Jun 18
0 Comments