Software that I use, and how: harmonics and FFT 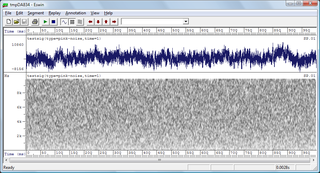 It is 1 second of pink-noise. A the top you can see the waveform, at the bottom a very confusional image, its spectrogram.

Now look at this: 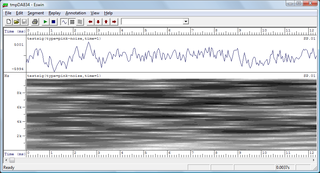 It's the same waveform zoom in at 12 millisecond; you note the irregularity of wave and its spectrogram. 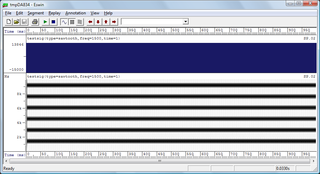 This is 1 second sawtooth at 1500 Hz (or CPS, Cycles Per Second); it means 1500 crests waveform in 1 second. In this image you can't see them because 1500 crests in few centimeters are very constrict, so: 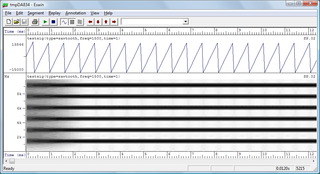 The same waveform with zoom in. Now you can see the crests (crest= section of the wave that rises above the 0 line position); you can count 15 of them in 10 milliseconds, 1500 Hz : 1 second = 15 Hz : 10 milliseconds.
Here the spectrogram represents a series of lines, the harmonics, each one at the same distance.

In this way you can understand that:

1 - noise hasn't got an exact frequency, its spectrogram is irregular, this sound is enharmonics, its crests are irregular

2 - frequency (Hz) represents the repetitions number of crest in 1 second; frequency is closely connected to the pitch of a sound.

3 - if a wave is periodic (regular repetion of crest), probably has got harmonic components.

4 - if a wave is not periodic, it has got enharmonic components (for example gong, noise, handmade bells).

6 - the pitch sensation is not so definite if the wave periodicity is less regular.

A nice aspect is the relation among octave intervals; now we consider an harmonic sound at 100 Hz, it is create by:

By this theorem, each audio signal can be split in many harmonic components, each one with its frequency, amplitude and phase, as show in the upper images.
So we understand that each natural harmonic sound is the amount of many overtones, and the relation among their intensity fix our timbre perception.

There is a problem: if it is true, I could re-add harmonics to obtain the original sound, but the result can't be the same, because each natural sound is living and develop itself through time. For example it is impossible reproduce the sound of piano only re-adding its harmonic components because thay can't reproduces the hammers sound, and second after second each harmonic can turn its amplitude or lenght.

The same things about voice.

By spettrograms and sonograms we can analyze all the harmonic or enharmonic components of a sound, but that's not all. There are formants too.

Permalink Reply by Tran Quang Hai on July 5, 2008 at 3:36pm
Dear Marco,
Thank you for your explanations concerning the series of harmonics . They are clear and simplified and useful for the understanding of the order of the harmonic series .
The formant is also important , depending on the voice quality of the performer. This is why we can recognize such and such voice of each performer . These singers can sing the same melody with the same voice technique but they can't get the same spectrum.
Tran Quang Hai

Permalink Reply by Marco Tonini on July 5, 2008 at 4:43pm
Dear Tran,
thank you.
I don't think to be the greatest expert about acoustic, in fact my real sector is another, vocality in all its kinds of emission.
I only hope to be useful because I have many friends and students that practise overtone singing, opera singing and software manipulation without a correct knowledge about overtones and formants.
But I am conscious that in this site there are many people that can offer its own huge knowledge too.

Download 3 Days of Healing Music For FREE at http://matthewmusic.net Recognized as a leader in the global sound healing movement, Matthew Kocel is a throat s...
Wednesday
0 Comments

Download my Healing Music Series for FREE at https://matthewkmusic.com For best effect please listen with headphones or good speakers with no distractions. O...
Jun 18
0 Comments