When it is done: I would recommend to try to combine it with the "Scientific" one. So the octaves would become visible again. :)
What do You think?

Permalink Reply by Filip Rydlo on February 6, 2010 at 9:40am
This was one of my very first ideas. It is obsolete now.
I will leave it here and explain it just for thread-archival reason, so that discussion still makes sense...

I suggested to mark the octave like: I, II, III and also to mark the interval in that octave by a number: 2 (a sacond), 3 (a third) , 5 (a kvint), 7 (a septima) ... so that musicians (and singers) can know where the overtone is harmonically situated - BEFORE they become cmpletely familiar with overtone numbers. :)

Permalink Reply by Skye Løfvander on February 6, 2010 at 12:50pm
Hello everybody,
Thank you for this opportunity!
I should like to turn the issue upside-down:
Instead of focusing of a practical solution to bridging the gap between an inherent natural pattern (the harmonic series) and a product of culturally conditioned language (music notation system) I should like to return to the starting point with Filip's urge to make 'the octaves visible again'.
As a member of a choir called Spectrum (and thank you for your acquantaince by your choir's visit in Copenhagen) he is obviously aware that at least one octave - or really almost an octave has been visible since the days of Noah: the rainbow spectrum which covers just a little less than an octave. And by the fact that we consider violet and red neighbours on the painters palette, we are led to the conclusion that in human conception there is an analogy of the colour octave and the audio octave, both being defined by the frequency and wavelength ratios 1:2. The analogy being that in both worlds the octave means something like 'comming back to a quality already experienced but on a new level' - either higher or deeper.
From here it is necesarry to think calmly as most people fascinated by holistic approaches tend to spread their 'equals signs' to loosely and thereby harvesting a poor crop where planets, tones, colours, anatomy, etc. gets badly entangled!
First thing is that the visual octave, the rainbow spectrum is separated from the audible octave by more than 40 octaves which is a gigantic span. Already on the piano we tend to conceive the octave as something which is not absolute in the extreme ends, high and deep, and colur and sound as fields of conception are actually worlds apart!
Furthermore the light and and sound frequencies are basically two different waveforms (transversal and longitudinal respectively).
Lastly the very difference of range the human conception is tuned to between the two worlds (we see a little less than one octave but are open to about ten octaves of the audible spectrum) the structures which arise within these worlds obviously becomes very different. Basically you cannot detect the role of the perfect fifth (ratio 2:3) in the world of colours whereas it is most essential in music by the fact that 7 octaves is virtually the same as 12 perfect fifths.
Sorry for bothering you with all this but for me it is necesarry before we deal with the bridging between 'nature' and 'culture'.
It is not my intention to pull the discussion completely of its trail and I may contribute with ideas to the practical problem later.
Till then I should like to lead your attention to some of the videos I have uploaded dealing with this issue of visually enlightening some structural correlation between number, tones and colour:
Specially the octave spiral video (octave is the returning of an already known quality - structurally-visually: the spiral), the rhythm-tone transistion video (octave aspects) video and the video of pattern as music and number.

I really like Your comment! It is just a bit long.
But it was worth reading for me. Thank You.

I started thinking about using the spiral schematic as a symbol for every overtone.

for example: 5-th overtone could look like circle with dot in the center and 2 dots above it, for the 2 and 4 (octaves) and in addition, number 4 could be connected by a curve to the point where 5-th overtone is, on the spiral map ! Because it is in it's octave. :)

Permalink Reply by Skye Løfvander on February 9, 2010 at 10:27am
Hello Filip,
Thank you for your reply!
One thing I didn't include in my last comment is that actually for the time being the system that you already have elaborated to me seems pretty close to the most practical. If someone has come to a point where the accentuation of overtones becomes part of a score I guess he needs to take the trouble to learn the language. I feel much in accord with Jan Heinkes comments.
One reason for taking the discussion to more philosophical perspectives is that human language is always created in a tension field and sometimes it is not very practical to aim for the optimal.
If the type characters on our computers were positioned optimally we would be able to write considerably faster. The arrrangement we use is a gigantic waste of time just imagine everyone spending 50% less time typing! But obviously it is too big a practical problem to implement a different system.
Another point is that what seems optimal today may definitely not be optimal tomorrow. Many technically orientated people where optimistic during the 7oes by the perspectives of digitally displaying the time: 10:14:27, and many of them hoped that the sexigesmal (60-) base for time registering could be replaced by a more logical decimal (10-) base. But nowadays again everyone is back to the round watches with hands revolving. Maybe they have only subconsciously realized that it is question of two ideas which we cannot just replace: 1) time is cyclic 2) the round watches actually teaches us how to divide a larger whole - whether you interprete it as time or geometry. I shouldnt like even to imagine a society governed by a linear, decimal interpretation of time!
So when I present the idea of numbers as pattern I need to have realistic expectations. Actually I once spend most of a year developing a music notation system which - if not exactly optimal - in my view surpasses the staff notation we use at a number of points, but how to make the world adapt to the idea?
There is an ocean of examples of confusion and ambiguity (a word which may mean at least two things which are partly contradictory/ ambigious!) in all human languages, also those related to music, to my knowledge there are at least tree different ways of using solfege to mention one.
The harmonic series has its roots deep in universality and offers a genuine holistic approach to the universe with mathematic, phonetic, physical and musical perspectives and now it is our challenge to develope the language - or languages - and I am pretty convinced that this will not happen without much confusion.
Hopefully it is our privilege to deal with it!
Best,
Skye

I am honored that You consider "my optimal notation sys." practically good enough for today-world.

Language indeed is created in a tension field. (unless it is artificial - created by some great Great Master linguist like for example J.R.R.Tolkien)

OK, I will let "My Optimal Notation system" sleep for a while.

One day, when it will not be good enough for someone, he/she will just improve it and make it better. (like a language that evolves in time... )

Permalink Reply by Skye Løfvander on September 5, 2011 at 11:04pm
Well, not exactly notation in the traditional sense, but maybe useful for conducting and practice: 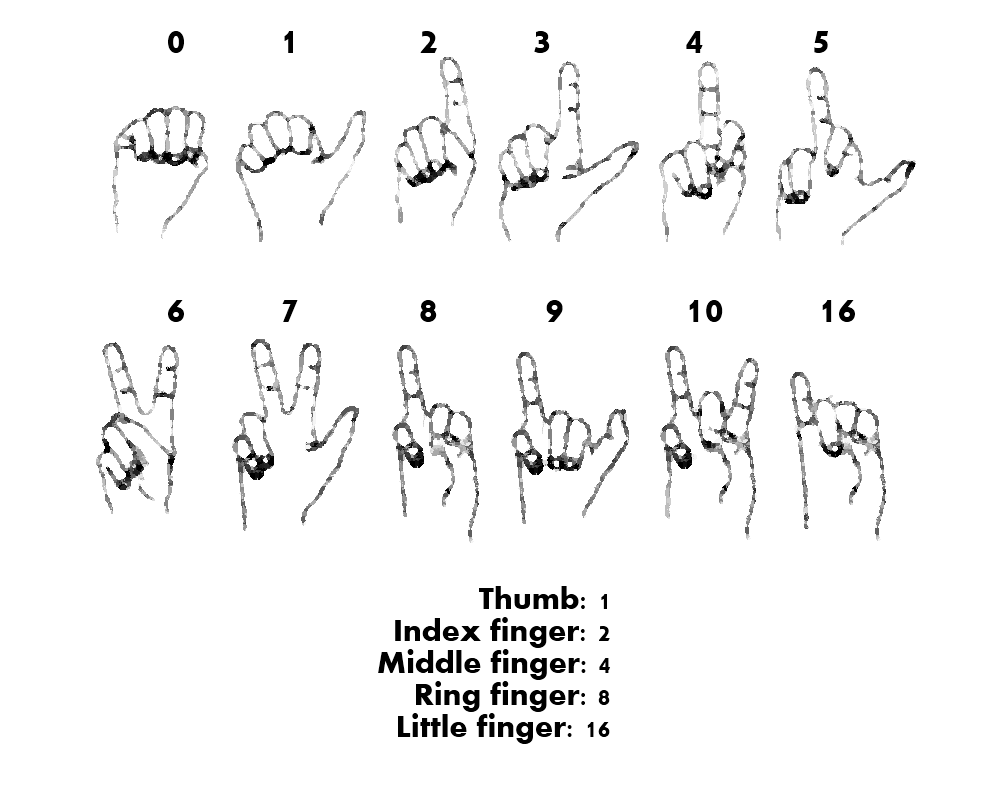 What may be the most remarkable about overtone singing is that it unites some very fundamental elements of speech (phonetics), music (intervals) and ... mathematics: each prime number incarnates a new tonal function through the harmonic series. The three fields share a common and very deep offspring which we may contact through our practice.
One of the oldest ways to indicate tonal functions is by hand and fingers (the guidonian hand etc.). And fingers have always been used to indicate numbers (a digit may be numerical or anatomical!).

Octaves are actually mirrored in the arithmetic series 1-2-4-8-16-... so it is obvious to find a finger counting system which may bridge the numbers and the tonal functions. The most interesting in my view would be to utilize the binary counting, where each digit position is exactly the 1-2-4-... (whereas the positions of our common 10-digit system are 1-10-100-1.000-...).

In practice it can be used by choir leaders to indicate which harmonic should be amplified, and for establishing awareness in personal practice... developing a harmonic finger language.
One hand can indicate numbers from 0 to 31 which should be sufficient for most overtone singers (and those who need wider frames don't need the fingers). This also gives the choir leader the opportunity to indicate two different harmonics for two different voice groups within one choir.