On a facebook group we are debating about thia question (search IL diapason... "LA" a 432hz):
there is a theory (Ananda Bosman and others) that suggest to reduce the 440 frequency of the tuning fork to 432 Hz.
In my opinion it would be right to reduce the tuning fork frequency but it is a nonsense the number 432; you know what is the Hertz unit, it is in relation with the "second" time unit. If this time unit was more or less than the actual, the theory (and others) would be a poor bluff.
What do you think?

Permalink Reply by Johannes Lind on September 27, 2010 at 11:56pm
Just some thoughts on Christopher's post:

In my practical experience perfect tuning frequencies depend on the way instruments are built.
E.g: I've got a saxophone which was built in 1947 and after years of experimenting with it I came to the conclusion that it sounds best in its own natural resonance at the pitch of a=438 Hz. I think most of the saxophones built at that time were designed for this kind of tuning. Today's standard tuning pitch for the music I use to play is a=442 Hz, so I always get into trouble when playing whith large ensembles or instruments that are in fixed tune ('classically' high pitched pianos).
My other saxophone (newer, maybe from the 1980s) sounds great at a=440 Hz. On both instruments, when played at their perfect natural resonance pitch, I can develop a complex and controled spectrum of overtones, which lacks when I have to tune them in another way. Eventually, this leads to music that is more emotional (in my ears) because it's easier to form the sound I want from the instrument. I just have to understand and respect the entity of it, in a way.
Same goes for overtone singing (for me at least). I mostly use a 440 tuning fork for practicing and quite often when having finished an exercice I find that my 'inner pitch' has fallen. When I start from a lower tuning (437 or 438) I don't get this phenomenon and the quality of overtones is much better while it's independent from the absolute pitch of the root.
So, I guess my perfect natural resonance pitch is a=437, although I was built in 1982... strange! 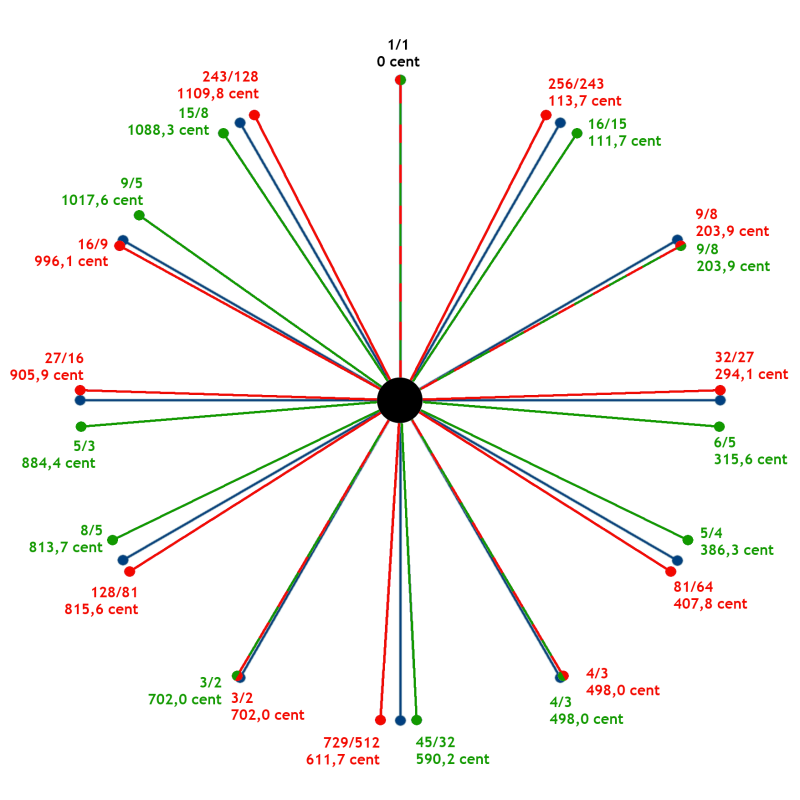 Well let us begin from the top with your first point, then I may come back to the others - it is getting late!
I wouldn't say Pythagorean tuning is a system of 'easy ratios' it would be more correct to say that it as tonal system with a simple GENERATOR (the 3:2 proportion) - and it does make quite a difference.
Neither I think it would be correct to characterize Pythagorean tuning as 'more sharp'.
I have made a diagram with a comparison of the 12 TET, the Pythagorean tuning system and Just tuning (which I would call the system of easy ratios).
Legend
Blue: 12 TET, the octave divided in 12 equal proportions. It looks extremely pleasant to the eye but what is visually pleasant may not be harmonic to the ears - just think of the paper A format which is very harmonic to the eyes but in music the proportion 1: squareroot 2 is extremely dissonant.
The axises are found at 0-100-200-300-... etc. cent.
Red: Pythagorean tuning, it is symmetrical (apart from the tritone) around the vertical line.
Green: Just tuning, elements from the harmonic series, 2 (octave), 3 (perf. fifth) and 5 (maj. just third) combined.

Finally the intervals from the harmonic series is our common deepest reference when it comes to defining it pure or not - also among music theorists. So for example the Pythagorean major third is far from just and both the 12 TET and Pyth. tuning fail to render just thirds and sixths.
That is one of the reasons that during the renaissance with the oral polyphony where the thirds were very important (they still are but we seem to have forgotten) they used a fourth and different system (or series of systems): meantone temperament - where the thirds are just.

Permalink Reply by Skye Løfvander on September 28, 2010 at 1:58am
On a more practical level just tuning is not very suitable for polyphonic music as the chords become to diverse - they tend to contain many different intervals.
One thing you may say about Pythagorean tuning is that it has two and only two semitone intervals.

Permalink Reply by Skye Løfvander on September 28, 2010 at 10:10am
@ Marco:
Halleluja for your not accepting anything - we need to question the fundament!
I think the answer was decent enough: the second is a second because of subdivisions - subdivisions of the apparently only handy constant within the rhythmic phenomena spectrum - one day. So the old boys divided the day in a way which would be convenient. I already did argue for the convenience of a sexigesimal division. And we are still missing some good universal reference time unit within the range of time shorter than a day. Scientist need to go to the atomic level to find constants they can use as actually days are becomming longer with the age of our planet. See Wikipedia article.
The division of the day in 12 (24) is probably a loan from another area were a lot of tempering is needed because ultimately the set pieces do not fit: calendars. I suppose you would agree with me that a division of a year or a day in four is universal (two culminations, two balance points). Like when dealing with time units shorter than a day, it was basically necessary to find smaller subdivisions of the year and here the moon came in to the picture which is basically why we have 12 months (and 12 hours).
It is somewhat ironic that in a subculture dealing with planets, frequencies and 'star wisdom' if you ask people of the length of the lunar month, they tend to reply 28 days (they are thinking within a 7 based system) whereas the more correct answer would be 29½ days.
What is fascinating is the point that ultimately the lunar month does NOT fit with the solar year and the solar day does not fit with the lunar month... very much like the problems we have with tuning in music!
Like I wrote to Chistopher I am very curious to hear any suggestions for time units shorter than a day which have a universal basis. The problem is that the overall rule of nature seem to carry the headline 'Variance' so it would be risky to try to establish a 'standard heart beat rate' or 'standard respiration rate' etc.
In my reply to Christopher i refered to my own quest for a references based in nature and only succeded to find a length measure but as it can be converted to time (frequency) by the formula fxλ=c (frequency multiplied with wawelength = constant, 340 m/s) there may be something to begin with (I am aware that talking about constant refering to this very useful formula brings us into another problem as this particular constant varies according to temperature).
You may find my reflections at this link. I am sorry, it is in danish but I suppose you may get most of the meaning by using a translator tool.

no, I accept all if there is an explanation, I agree with you about your considerations but it seems to me we run around the real question.
I'm not interested about what ancient culture decided about the second calculation. And the answer "it was a convenient choose" doesn't solve the problem, so I try to submit my anwer like a my consideration:

Permalink Reply by Skye Løfvander on October 10, 2010 at 1:35pm
@ Marco:
I agree with you that it doesn't give much sense to use a time unit which actually belongs to another dimension - like when we in music we use the time unit a second (wawes pr. second ~ Herz) to measure the frequency. Obviously the time cycle of the earth day - which is the foundation for the second as a time unit - is so wide apart from the time measures we deal with in music that I agree about your point that 'the magic' becomes somewhat speculative.
It is also a bit ironical that we when baking a bread or other everyday activity actually are relating the weight measures to the size of the earth because the meter was originally defined as a fraction of the earth diameter (and they didn't even get it right!) and the standard kilo was defined as the weight of one cubic decimeter of water.

Permalink Reply by Daniel Perret on October 10, 2010 at 5:39pm
I'm not shure about the astronomical implications of the second. My reflection is that the second corresponds very nicely with the frequency of the heartbeat at rest ...or is it just my heartbeat at rest ? There is an obvious feeling difference in instruments tuned in 440 and 432. The gragual rising to 440 and 444 was also brought about the speeding up of our time and energy.
Daniel Perret

Permalink Reply by Skye Løfvander on October 10, 2010 at 6:04pm
Hi Daniel,
Like we discussed earlier of course you will notice differences when you have a reference. Of course you may notice a difference if your inner tonal reference system has become accustomed to a'= 440 Hz and then getting exposed to either a'=432 or 444 Hz.
The rising from 440 Hz to 444 is obviously an effect of 'inflation' - when listeners are used to a standard pitch the sound will appear brighter if it is raised. On a more practical level violins built for a much lower standard pitch than even 440 may have difficulties to stand the tension.
But all this is not really what the discussion seems to be heading at right now.
The idea of a 'standard heart beat rate' may seem at the same time promising and somewhat frightening.
I guess that even by looking at the second indicator arm of a normal watch some entrainment will take place, but like Marco I do not see any reason to force some 'cosmological' order into this when after all it is what he calls convention. Human pulse varies a lot - just like the tempi of the music - and the beauty of it is not to get stuck in the grooves of the system.

Permalink Reply by Marco Tonini on October 10, 2010 at 8:56pm
Thank guys!
I would be very happy if someone can verify that the "second" is not a conventional choose, so to prove the 432 Hz theory is true.
I will wait all my life. Meanwhile I'll continue to seek the truth, he he ...

Permalink Reply by Marco Tonini on October 13, 2010 at 3:22pm
Sure Christopher, good words and great poetry, but the 432 tuning fork theory is based on mathematical reasonings, so we can't talk using nice abstract concepts, which are interesting but out of the main context.
Numbers are numbers and my consideration was really simple.
Like Jens said on the first comment (and I'm agree), it can be a nonsense to use 440 Hz, many people think it is not a good reference pitch, because of bad feelings, inner sensations and vibrations, ... but I think we can't say 432 Hz is better without a mathematical explanation, and it seems to me very difficult because of the conventional time unit, the second.

I think, this conversation board is somehow problematic, because it does not shows the posts in chronological order. It's difficult to find replies in a proper way.


Okay, let me know if you all prefer the chronological order or the threaded where replies are indented below the post or reply they respond to.